Jeonbuk defeated FC Seoul 4-1 in the first leg of the Asian Football Confederation (AFC) Champions League semifinal at Jeonju World Cup Stadium in Jeonju, some 240 kilometers south of Seoul. They can now reach the AFC Champions League (ACL) final for the first time since 2011 if they avoid a loss by a four-goal margin or a 3-0 defeat in the second leg. The two will play their second leg at Seoul World Cup Stadium on Oct. 19.

"I asked the players to go aggressively from the start and it worked," Choi said after the match. "Since both sides know each other very well, we had to put forth our best effort in the first leg."

Jeonbuk are now 4-0 against Seoul this season, including their three encounters in the domestic league. They currently sit atop the K League Classic standings with an unbeaten record of 18 wins and 14 draws.

"Because we had beaten Seoul three times, our players were confident (of winning Wednesday)," he said. "The players performed perfectly as they prepared and that's why we collected the huge victory."

Choi, who led Jeonbuk to their first ACL title in 2006, said the players will enter the second leg with confidence because of the big win.

"We can now play the second leg in our favor," he said. "Seoul now need to make their winning move, and we know how the match will be played."

Seoul head coach Hwang Sun-hong lamented that though his players tried their best to score goals, they were mentally shaken after conceding the first goal.

"In a match like this, the importance of the first goal is very big," he said. "We played a difficult game after that penalty (for the first goal)."

Hwang, who took over Seoul in June, said they have no choice but to focus on the attack in the second leg at home.

"We need to strengthen our attack (in the second leg)," he said. "This poses a risk to our defense, but we're not in a situation to worry about that." 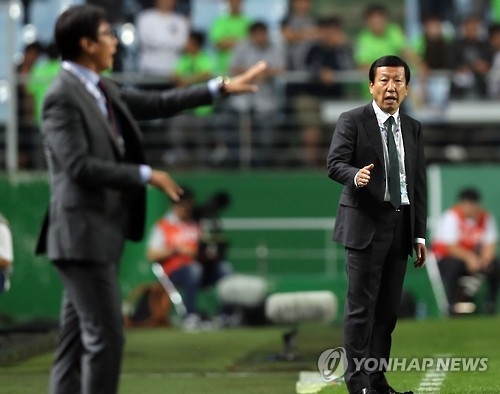