SEOUL, Sept. 30 (Yonhap) -- For Maria Lee, it was difficult to settle down after first moving to South Korea because she was not speaking the local language fluently. As an "ajumma" -- a Korean word for a middle-aged woman -- herself, she wanted to help 1.7 million other foreigners living in the country overcome these challenges.

When Lee decided to start her own business, she sought help from the Seoul Global Center (SGC), which provides assistance to foreign entrepreneurs seeking to bring new innovation and ideas to the country.

Funded by the Seoul Metropolitan Government, the center opened in January 2008 and now has seven different branches in the capital city. This network, on a mission to assist Seoul's ever-growing expatriate tribe, is aimed at helping foreigners settle down.

Another task of the center is to offer an incubation service to promising foreign-owned startups with office spaces at three different locations and other guidance, such as counseling and startup mentoring.

Following six months of preparation at the incubation center, Lee launched "Ask Ajumma," a virtual concierge service application, in May 2015, with two other foreign national colleagues. The service attracted more than 3,000 customers in just five months. 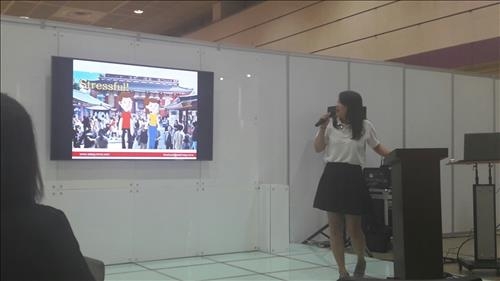 The service is to assist foreigners with ordering food, furniture, groceries and flowers, reserving hotels and housekeepers and virtually anything. A user can send a message via South Korea's most-used mobile messenger Kakao, Facebook or email, and describe the product or service being sought with as much detail as possible.

"The idea of Ask Ajumma was conceived to make living in South Korea easier for all foreigners," Lee said, noting that the company recently also won a startup grant from the Korea Techno Venture Foundation.

In an effort to further promote the startups, the SGC held the Foreign Startups Business Fair at the Convention and Exhibition Center (COEX) in Seoul on Sept. 28 where a total of 15 group of international entrepreneurs from across the world pitched their business ideas.

"The Seoul Global Center will best help you with incubation programs. We provide what new entrepreneurs want to do," Paul Carver, head of the center, said in an opening speech.

The startup scene in South Korea started to change just a few years ago with the launch of the first batch of the accelerators and support programs after President Park Geun-hye came into office in 2013.

Steve McKinney, president of Seoul-based McKinney Consulting Inc., is one of the first-generation foreign entrepreneurs who launched his own business five years ago. He currently also works as a mentor for various foreign aspiring businessmen.

"We did not have this kind of support when I started the business. It is wonderful that we have this support," said McKinney. 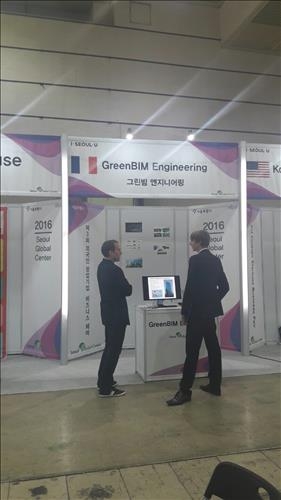 Park's centerpiece "creative economy" policy seeks new and inventive business opportunities and more jobs through the fusion of information technology and other industries.

The government already pumped US$2 billion into both domestic and international startups and plans to inject an additional $3.7 billion into startups in the form of grants and other initiatives in the next three years.

The ultimate object of various startup support measures is to promote the expansion of an open entrepreneurship ecosystem in Asia and to assist the country's evolution into a prominent startup hub in the region.

To push for the initiative, the central government, in cooperation with provincial governments, has established "creative economy innovation centers" in 17 locations across the country. The centers have provided various kinds of support for aspiring entrepreneurs both at home and from abroad.

As of August, the centers have offered various forms of support to 1,175 startups, and 1,644 small and medium-sized enterprises, and have helped attract investments worth $256 million for these local firms. Moreover, the startups, which have been supported by the centers, have created 1,360 new jobs. 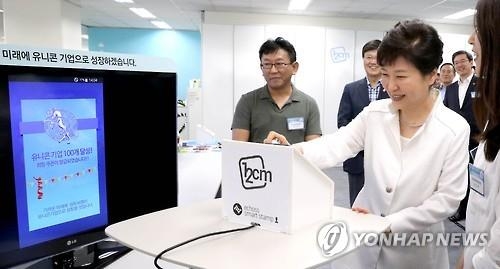 At the Creative Economy Valley in Pangyo, a total of 40 foreign startups are currently preparing their business as part of an accelerator program, the K-Startup Grand Challenge.

The campus is designed to offer a wide range of services for new businesses largely involving big data, fintech, the Internet of Things, cloud computing and mobile technologies. It currently houses some 200 firms including the Yozma Group, an Israel-based global venture capital firm, and TEDCO, created by the Maryland State Legislature to support startups.

The challenge, the first of its kind, is sponsored by the Ministry of Science, ICT and Future Planning and conducted by the National IT Industry Promotion Agency (NIPA) with the cooperation of four accelerators, or venture capitals.

"The program endorses the inflow of promising startups in the broader Asian market so that the entrepreneurs can use South Korea as foothold for their international cooperation in Asia," said Choi Bo-young, an NIPA official in charge of the program.

The 40 startups were picked from a total of 2,439 applicants from 123 countries, with their business areas varying from artificial intelligence (AI) to virtual reality (VR). The teams are participating in a three-month-long program that includes in-depth monitoring from accelerators.

The program also aims to foster the local tech ecosystem in South Korea which up to this point has been heavily dominated by the big corporations like Samsung Electronics Co. and LG Electronics Inc. 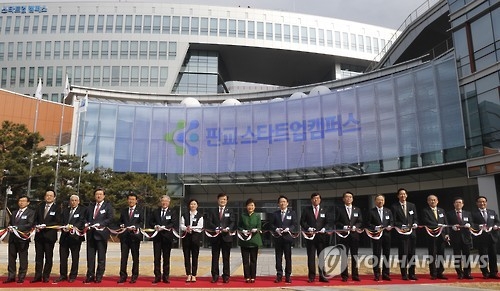 Four of Seoul's most successful accelerators -- ActnerLab, DEV Korea, Shift and SparkLabs -- are matched with 10 startups each to provide training and other support at Pangyo, the area dubbed South Korea's Silicon Valley.

Over the next three months, the startups will work and compete and 20 teams will be picked in December for the second stage and participate in a domestic settlement program. The 20 teams will be able to extend their stay for another six months and receive US$36,000 each in funding from the government, with the top four getting additional support.

Angie Huang is the founder and CEO of Herxun, a company that produces a mobile service platform called Lightspeed. The product provides a set of tools for mobile developers so that developers can add messaging, social and notification features into their applications easily.

After setting up the company in Beijing and Taipei two years ago, she participated in the program to expand her business to other regions of Asia.

"There is a saying that here is Silicon Valley of Asia as everything is so fast. We thought it would be a good place as there are a lot of enterprises with potential targets," said Huang, noting that the company hopes to close a couple of deals with local enterprises and investors. 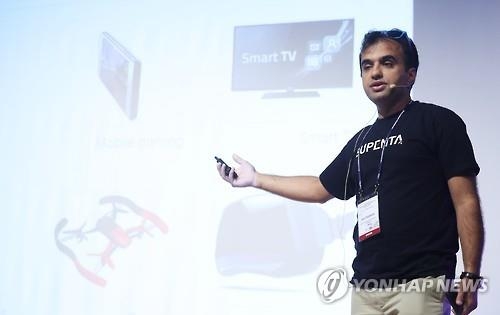 Industry analysts forecast that the local ecosystem for startups will have further matured in the next few years, with a dozen accelerators expected to grow.

Kim Seong-tae, a researcher at the state-run think Korea Development Institute, said South Korea is an attractive hub for foreign entrepreneurs seeking to start their own business for three reasons.

"South Korea is safe and highly stable, one of the most wired countries in the world, and, most of all, can be a gateway to the global market," said Kim.