(Editor's note: This article is the 16th and last in our feature series on South Korea's lesser-known tourist spots.)
By Lee Haye-ah

GUNSAN, South Korea, Sept. 29 (Yonhap) -- This weekend take a trip back in time in the historical city of Gunsan as citizens and visitors gather to honor Korea's struggle against Japanese colonial rule.

The city of 280,000 is a vivid and poignant reminder of the oppression of the colonial period (1910-45), with everything from a bakery to a former bank building bearing traces of the past.

It's a three-hour bus ride from Seoul, and unlike many other Korean cities, Gunsan has kept much of its former appearance intact under the slogan that exposing wounds heals.

Perhaps a part of that campaign is the "Gunsan Time Travel Festival," which will kick off Friday for a three-day run. The annual event celebrates Gunsan's modern history through reenactments of the Korean people's marches against Japanese colonial rule, a singing competition limited only to songs from the 1920s through 1970s, and a treasure hunt involving traditional games and a history quiz, among other events.

Much of the festival will take place around the Gunsan Modern History Museum, which serves as the center of the city's historical tour. 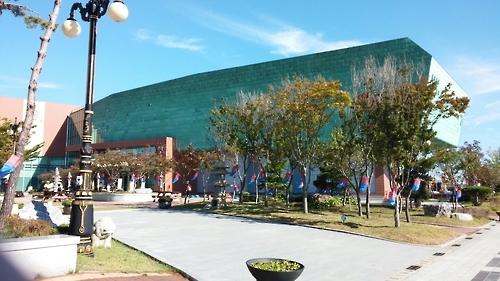 Kim Seon-hee, a tour guide at the museum who has lived in Gunsan since she was 3 years old, said she didn't always like the fact that her city was a symbol of the days gone by.

"When I was young, in the 1960s and '70s, I didn't like it that people would come here to shoot historical films," she told Yonhap News Agency during a recent tour of the city. "Now, cities like Incheon and Mokpo, which are also large sites of modern history, envy us for being quick to promote our cultural heritage."

It was only a few years ago that Gunsan became a major tourist attraction as the city began to restore and reconstruct its colonial-era sites. The fact that the city has preserved much of its modern history wasn't entirely a matter of choice.

"It means we were underdeveloped," Kim said. The description, according to some locals, still applies to the city today. But it wasn't that long ago that Gunsan served as a logistical hub bustling with commercial activity.

During the Joseon Dynasty (1392-1910), the city was an economic and military strategic point. It had a warehouse to store tax grains collected from across the Jeolla provinces and a military camp to protect the warehouse. The Jeolla region, located in the country's southwest, has historically been the nation's breadbasket, and Gunsan sits below the northern border of North Jeolla Province.

When Gunsan opened its ports in 1899, the city established a so-called settlement where foreigners could live and trade freely and exercise extraterritorial rights. It designated the area as a joint settlement for all countries to prevent Japan from occupying the land, but the city soon fell under Japanese control.

"It's a history we'd like to hide but in fact should know better," Kim said as she took a group of tourists around the four-story museum.

As the exhibits show, Gunsan's fight against invading Japanese forces didn't always end in defeat. The city takes great pride in the fact that General Choi Mu-seon destroyed more than 500 Japanese ships in the battle known as the Great Victory of Jinpo in what is now Gunsan in 1380.

Other exhibits include displays of Gunsan's history as a center of marine trade and the lives of locals during Japanese colonial rule.

Kim Hye-min, a 28-year-old tourist from the southeastern city of Daegu, said she was visiting Gunsan a second time because the museum was all she saw during her first trip.

"It's a historical city and the tourist attractions are all close to each other, so it's convenient to travel on foot," she said. 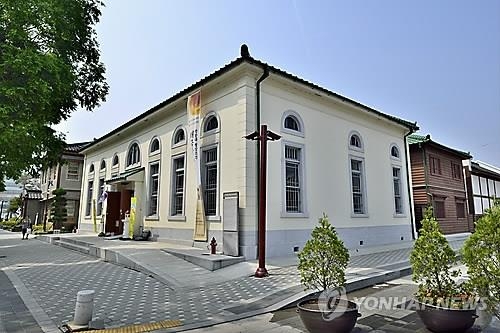 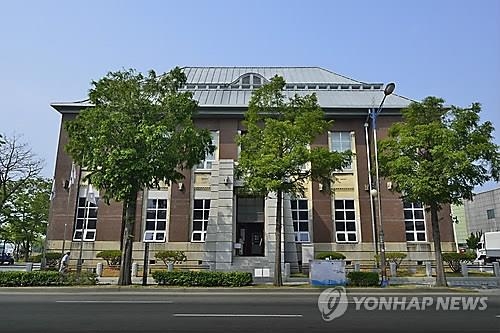 The main sites are only meters apart from each other, starting with the former customs office, located closest to the museum, to the old buildings that used to house a branch of a Japanese bank, as well as a branch of Korea's central bank.

Built in European architectural styles, the edifices are a marvel to look at, with high ceilings and arched windows, but the displays within are a reminder of the wealth Japan extorted from Korea through Gunsan, mostly in the form of rice.

The former "Bank 18," which was the local branch of a Japanese bank based in Nagasaki, has been remodeled into an art gallery showing works by artists from Gunsan and North Jeolla Province. There is also a hall dedicated to one of Korea's most revered independence fighters, Ahn Jung-geun, and a large vault used by the Japanese colonialists.

A few steps away is the impressive building that used to house the Gunsan branch of Korea's central bank, which was renamed Joseon Bank by the Japanese. The second floor is built in the form of a balcony overlooking the first floor, and from above, visitors can watch a video of Gunsan's modern history on a large screen installed at the bottom.

What's interesting is that the building once served as a wedding hall, and then as a nightclub, before it caught fire in 1990 and was abandoned for nearly 20 years. The municipal authorities then purchased the building and renovated it to its current state.

Before continuing the tour, take a break at the Lee Sung Dang Bakery, which in itself is a relic. The bakery traces its roots to the early 20th century when a Japanese businessman ran the store as a bakery, cafe and restaurant.

It's built such a name for itself over the years that among Koreans, it's nearly synonymous with Gunsan. On any given day, there will be long queues of people standing outside the store to buy the two types of bread it is most famous for -- a bun filled with sweet red bean paste and a "vegetable bun" filled with cabbage, carrots and, ironically enough, pork. 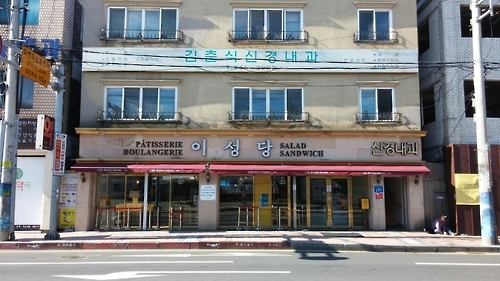 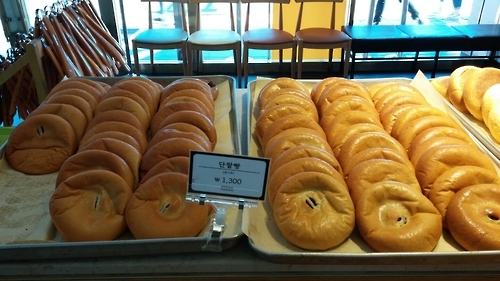 For those wanting a proper meal, Gunsan is also famous for its Chinese food. Bokseongru, which is one of the most well-known Chinese eateries in the city, has been closed recently as the owner is recovering from surgery -- there's a sign on the door that says that -- but Jilinseong is wide open, inviting food lovers to line up for a bowl of the now-famous "gochu jjajang."

"Jjajang" is a savory black bean sauce that's poured over noodles or rice. Add "gochu," or hot pepper, and you get a flaming spicy bowl of jjajang noodles that many people give up on before finishing. Compared with many other restaurants, the jjajang served here is rich in ingredients, with onions, cabbage, shrimp and sweetly seasoned pork. But most people will end up leaving the place remembering only their burning tongues and stomachs.

To soothe these patrons, a yogurt vendor stands outside Jilinseong five days a week, selling a wide variety of yogurt drinks and cold coffee to suit different tastes.

Jeong Han-sae, a 20-year-old local who was visiting the historical district with his girlfriend, said he thinks these joints are the biggest pull for tourists here.

"I think it's because we have places like Lee Sung Dang and Jilinseong that the city is opening these museums," he said. "I don't think they originally intended to build them -- they're raising these historical structures because the tourists are coming to taste the food."

After buns and Chinese noodles, if you're still craving some authentic Korean food, cross the road from Lee Sung Dang. For only 7,000 won (US$6.40), Joseongak will serve you a hearty meal composed of rice, spicy seasoned pork, grilled fish, steamed eggs, two kinds of soup and a variety of side dishes. 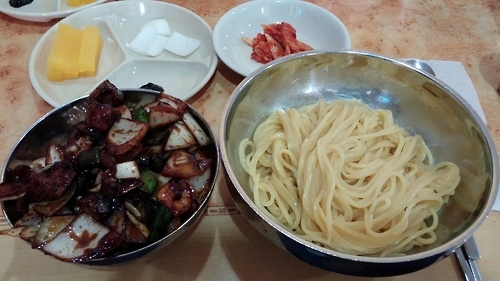 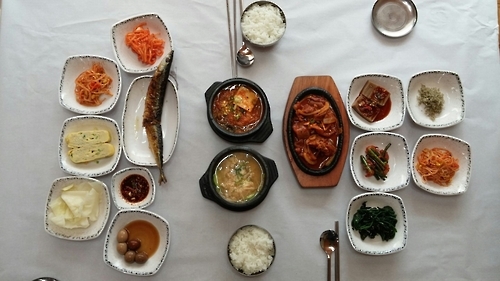 "The people serving food at restaurants are so friendly here," said Um Mi-seon, a housewife from Seoul who was visiting the city with two friends. "In general, the people are friendlier, and the city is less commercialized than Jeju," she added, referring to the southern island that is Koreans' top holiday destination.

In general, the pace of life is definitely slower and more relaxed than in Seoul. Buses don't come as frequently, but if there is time to spare, catch a bus to the Gyeongam Railroad Village.

Houses and shops line both sides of a 2.5-kilometer-long railroad, creating a unique atmosphere that transports people back in time.

The railroad was built in 1944 by a paper company that used it to move goods and raw materials. Freight trains made up of five to 10 containers traveled through the village twice a day at 10 kph. Each time, nearby residents would make sure the railroad was clear of their belongings, including hot peppers that were put out to dry and even their dogs. The railroad eventually went out of service in 2008.

Now many students and young couples come to take photos in the village with the narrow railroad as their backdrop. Some even come dressed in their school uniforms or pay to borrow uniforms from a rental shop next to the railroad. 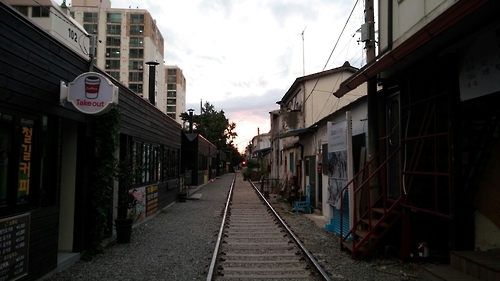 Kim, the tour guide, said Gunsan sees the most tourists in the spring and autumn. The Chinese often come on group tours, while the Japanese come individually or in small groups to trace back the steps of their forefathers, or in some cases, revisit the city they once lived in.

Walking on the grounds of Dongguk Temple, which is the last remaining Buddhist temple built in Japanese style in Korea, she indicated an irreconcilable divide between the two countries.

"When I take Japanese tourists around, some of them will see the sites and apologize for what Japan did to Korea," Kim said. "Others will point to the city's development and say, 'This was possible thanks to us.'" 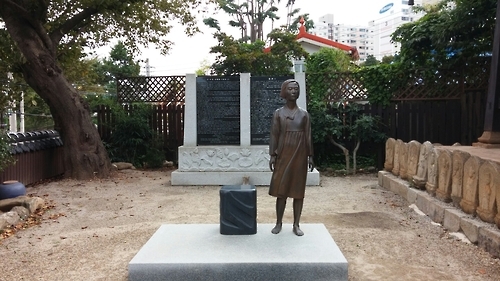 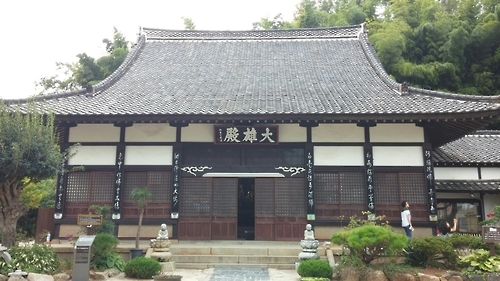 (Yonhap Feature) Travel back in time in Gunsan

(Yonhap Feature) Travel back in time in Gunsan