SEOUL, Sept. 29 (Yonhap) -- South Korea's main opposition Minjoo Party of Korea said Thursday the ruling party must end its boycott and return to the National Assembly unconditionally amid the paralysis of the regular audit.

Rep. Woo Sang-ho, the Minjoo floor leader, said the party cannot hold negotiations with Saenuri due to trust issues, and that the ruling party must make a decision to end the strike by itself.

"(On Wednesday), Saenuri backtracked on a move to return to the audit only three hours after the party head asked lawmakers to end the boycott, due to the hawkish members," Woo claimed, adding it is pointless to hold negotiations under such circumstances.

The tension arose from Saenuri and Minjoo's clash over the parliamentary speaker after he expressed apparent support for the passing of a motion to sack a Cabinet minister for alleged ethical lapses.

Rep. Lee Jung-hyun, the head of Saenuri who is currently engaged in a hunger strike and has been calling for Chung’s resignation, asked lawmakers to return to the parliament, although the request was turned by the party members.

The National Assembly speaker has been refusing to apologize, let alone resign, adding that all of the procedures were legitimate, and that he has the right to express opinions on certain issues.

"Politics are not a game. I hope that Saenuri will think with reason to decide on its future moves," Woo said, adding the opposition party cannot just wait, citing key national issues such as earthquakes and North Korean provocations.

Rep. Chung Jin-suk, the floor leader of Saenuri, on the other hand, condemned the parliamentary speaker for repeatedly failing to maintain his neutrality.

"The speaker earlier promised to accept Saenuri's criticism sincerely concerning his controversial opening speech of the regular parliamentary session," the party whip said, adding he wishes to ask if the speaker kept his promise.

The speaker seemingly sided with the opposition bloc's stance on the deployment of an advanced U.S. missile defense system during the opening speech.

The party whip added that Saenuri has no immediate plan to end the boycott, adding he will also join Lee's hunger strike.

On Thursday, Saenuri also sought to press criminal charges against the speaker for abusing his authority to pass the dismissal motion. 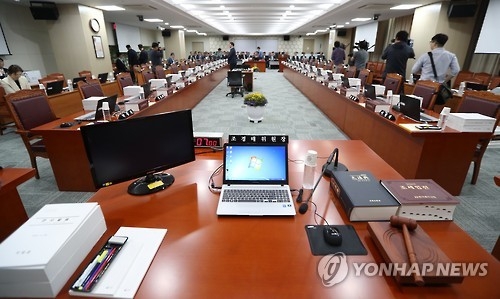