SEOUL, Sept. 29 (Yonhap) -- "Asura: The City of Madness" broke an opening-day record for R-rated films, drawing an audience of about 480,000, data showed Thursday.

The crime action drama by director Kim Sung-soo sold 476,527 tickets Wednesday, its opening day in South Korea, according to the real-time box-office tally from the Korean Film Council (KOFIC).

The previous record was 360,280 set by the Korean film "Hwayi: A Monster Boy" on Oct. 9, 2013, which was a national holiday. But Asura's performance is unusual for a film that hit the silver screen on a normal weekday.

The movie tells the story of a crooked cop, a corrupt mayor and brutal prosecutor who all do evil things for their own gains. The movie is set in the fictional city of Annam that is struggling to deal with crime and other irregularities. It stars Jung Woo-sung, Hwang Jung-min and Kwak Do-won in the three main roles. 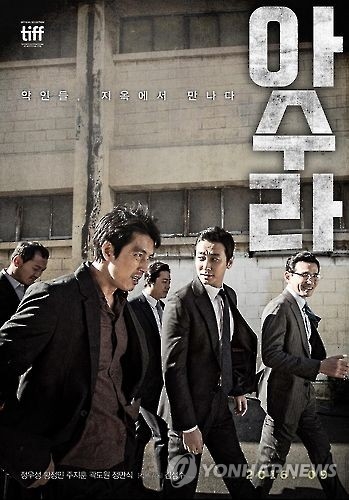