SEOUL, Sept. 29 (Yonhap) -- North Korean news outlets have drawn attention as they intentionally removed or covered the brand names of construction equipments being mobilized in the restoration of the flood-stricken North Hamkyong Province in their recent reports, local experts said.

North Korea experts here voiced in unison that the removal of trademarks is an apparent attempt to evade surveillance of the United Nations which has imposed tough sanctions on North Korea following a series of its nuclear and missile tests.

In its Sept. 5, 16, 25 and 28 reports on restoration work in the flooded areas, the Rodong Sinmun, a daily of the North's ruling Workers' Party, carried photos with the trademarks of bulldozers, excavators and forklifts either covered or erased.

The North's Korean Central TV also digitized only the brand-name part while showing an excavator operating at a deluged area in its Sept. 20 report.

In addition, a camera angle intentionally changed its course when it reached a part where the brand of an excavator was shown in the TV channel's Monday report. 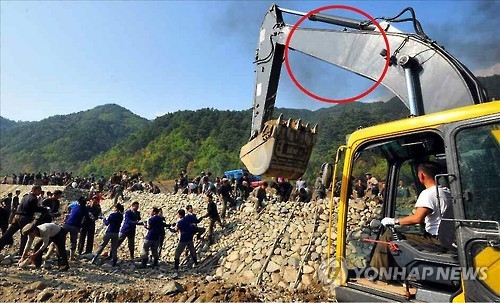 The removal and digitization of trademarks seem to be designed to prevent the strengthening of international sanctions, Yang Moo-jin, a professor at the University of North Korean Studies, said Thursday.

"If the identities of the equipments, which the North has secured with difficulty by evading international watch, are revealed, additional sanctions can be introduced via the backtracking of their sale process," he said.

Most of the construction equipment the North holds is reportedly second hand imported from Southeast Asian nations and China.
(END)