SEOUL, Sept. 29 (Yonhap) -- A local professor was sentenced to two years in prison Thursday on charges of manipulating a report in favor of Oxy Reckitt Benckiser, the first court ruling on the high-profile toxic humidifier disinfectant case.

The Seoul Central District Court found the professor at Seoul National University (SNU), identified only by his surname Cho, guilty of writing a report between 2011 and 2012 that said there was no clear causal relation between the substances in Oxy's products and lung damage.

The humidifier disinfectant case, one of the worst scandals involving a consumer product using chemicals, came to light after four pregnant women died of lung problems from unknown causes in 2011.

A government-led investigation confirmed a connection between people who died of lung problems and the chemicals used to clean household humidifiers.

The company asked the professor for the report in August 2011 to rebut the announcement by the Centers for Disease Control and Prevention (CDC) in return for money.

"The suspect violated research ethics for money, when he holds social and moral responsibility as the country's highest authority in the field of toxicology," the court said.

The court's decision came a week after Rakesh Kapoor, the head of the Britain-based Reckitt Benckiser, apologized for the pain and deaths of the South Korean consumers.

A number of trials are currently underway for officials at the local unit of the British household goods maker. 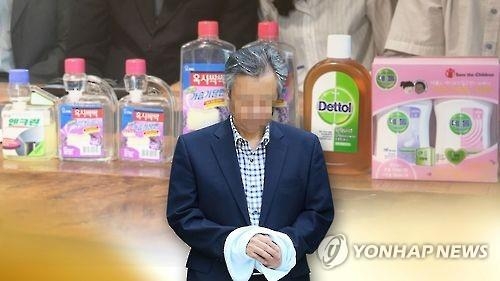