Trade, Industry and Energy Minister Joo Hyung-hwan made the comment in a meeting with executives of 16 foreign companies as part of a foreign investment promotion event.

The Foreign Investment Week, an annual event that ends later in the day, is meant to attract more foreign investment by highlighting business opportunities in South Korea.

Foreign investment in South Korea has been on the rise in recent years as Seoul is pushing to cut red tape and to reform its economic structure.

Foreign direct investment pledged to South Korea hit a record high of US$20.9 billion last year, compared with $13 billion in 2010.

Joo said at the meeting that South Korea has the innovation capability to lead new industries, noting the Asian country ranked No. 1 in the ratio of research and development spending to gross domestic product.

He also said South Korea can serve as a global production hub for foreign investors as Seoul has clinched free trade agreements with about 50 countries, including the U.S. and China. 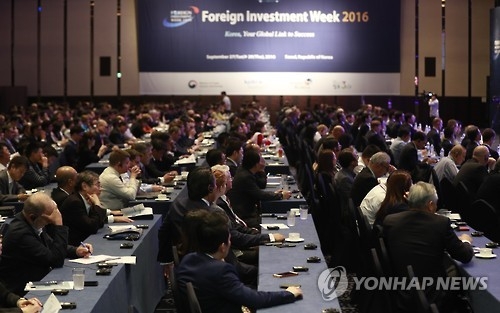