"He crossed the military demarcation line (MDL) in the middle eastern sector (of the Demilitarized Zone or DMZ) at around 10 a.m. and defected to the South," Seoul's Joint Chiefs of Staff (JCS) said in a statement.

Questioning is underway to find out what caused him to flee to the South and how he made it over, it said.

The military reportedly plans to hold follow-up questioning in collaboration with the National Intelligence Service and other related agencies, the JCS said.

It said the North Korean soldier didn't carry any weapons with him, and there was no exchange of fire between the two Koreas during his defection, according to the defense ministry.

"There has not been any unusual move by the North after the soldier fled North Korea. The military has put soldiers on high alert against any provocative moves by the North," a ministry official said.

Some 60 soldiers and civilians have crossed the border to defect to the South since 2010. Previously, a North Korean soldier defected to the South in June last year.

The two Koreas technically remain at war to this day since the Korean War (1950-53) ended in a cease-fire and not a peace treaty. 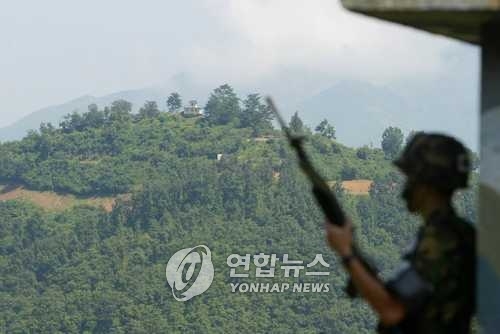