After a series of corruption scandals, including match-fixing and illegal gambling took place this year, the officials from the pro sports organizations have been working since July to roll out measures against sports corruption. The plan aims to strengthen the responsibility of athletes, teams and organizations, and make an organized anticorruption system, as well as reinforce precaution programs.

"We will have a task force work on details of the plan for the next two or three months," said Park Jae-young, secretary-general at the KPSA. "The measures will go into effect in January next year."

The KPSA members first agreed to establish an independent special disciplinary committee to review each pro sports organization's punishment for illegal activities. This means there will be two trials to determine the penalty against the offenders. The special committee will have the authority to decide whether the sports organization's punishment is proper or not and can impose tougher sanctions against the corrupt athletes and officials.

The KPSA said it will also form an anticorruption committee to reinforce efficiency in administrative works. It said collected fines from each member organization will be managed in one account and will be used for funds to support anticorruption programs.

The KPSA also decided to merge the corruption report center of each organization and raised financial rewards for tip-offs to a maximum 200 million won (US$182,000). It will also upgrade a secret inspector system and will unify disciplinary rules of each league so that there's no discrepancy in punishing corrupted athletes and officials.

The pro sports organizations also vowed to beef up their education programs. They decided to expand the program not only to pro athletes but also to young players and their parents. The KPSA added it will foster a special instructor on anticorruption education and make a guidebook.

The sports ministry said it will join the effort by establishing an organized cooperation system with other government authorities, including police, prosecutors, the Korea Communications Commission and the National Gambling Control Commission.

"We agreed that corruption in sports is not a personal matter but a problem that all parties need to take responsibility for," said Kim Jae-won, a sports policy director at the sports ministry. "With zero tolerance, I hope people watch how these sports organizations set and execute their plans to wipe out corruption in sports." 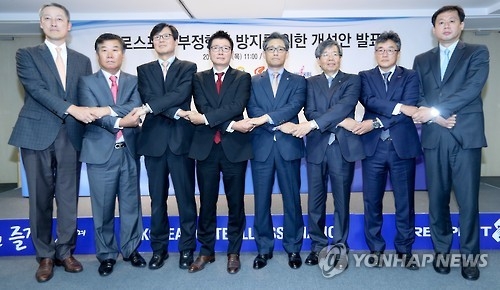