SEOUL, Sept. 29 (Yonhap) -- The iris-recognition capability of the new Galaxy Note 7 smartphone by Samsung Electronics Co. is expected to allow customers to use mobile banking services by Kookmin Bank, a commercial bank in South Korea, a bank official said Thursday.

Samsung plans to start sales of the new Note 7 on Saturday in South Korea, about one month after the world's biggest maker of smartphones announced a global recall of the old Note 7 due to a faulty battery.

Samsung will soon announce a partnership with Kookmin Bank and other financial firms to expand the ecosystem of the iris-recognition capability of the devices.

"Last-minute preparations have been underway to link our mobile banking services to the iris-recognition capability of the Galaxy Note 7," said a Kookmin Bank official. 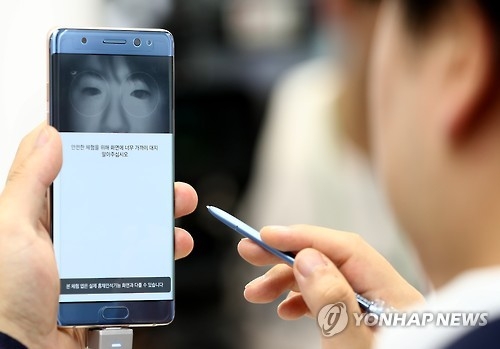 No date has been set for the start of Kookmin's mobile banking services on the Note 7, but it will begin in the near future, the official said.

In a statement on Thursday, Samsung said more than 80 percent of the old Note 7 smartphones sold in South Korea are expected to be swapped for new Note 7s by Saturday.

To better identify the new Note 7, the new devices have a green battery indicator and the size of the indicator is 30 percent larger than that of the old Note 7, which has a white battery icon.
(END)