SEOUL, Sept. 29 (Yonhap) -- South Korea's Constitutional Court on Thursday upheld the planned abolition of the state bar examination next year, paving the way for a full implementation of the U.S.-style law school system.

In a 5-4 vote, the judges ruled that the National Bar Examination Act, which stipulates the repeal of the state bar exam at the end of 2017, does not violate the Constitution.

In March, a local law student filed a petition with the court, saying the abolition of the state bar exam infringes upon the Constitution's rights to equality and the freedom of occupational options.

If the bar exam is abolished, only those who study at designated law schools are allowed to become lawyers, prosecutors or judges after passing the attorney-qualifying examination.

The three-year law school system was adopted in 2009 as an alternative to the bar exam in a bid to give more people a chance to become lawyers, regardless of their academic backgrounds. It was also aimed at increasing the number of attorneys so that the public can get quality legal services at lower rates.

The petitioner said the law school system only allows wealthy people who can afford the high tuition to have a career path in the legal sector, in a society where passing of the state bar exam has been regarded as one of the main gateways for upward social mobility.

The court, however, said keeping the state bar exam along with the law school system would cause more confusion and go against the fundamental goal of adopting the new system.

"The decision to adopt the law school system was made after an intensive discussion among the country's legislative, judiciary and administrative branches, as well as with the legal sector and the civic society," the court said. "Though there has been criticism about unfair admissions and poor curriculum at some law schools, they are problems that occur at the beginning of implementing a new system, and do not mean that the system itself is faulty."

Judges who opposed the law said the current state bar exam has a lot of positive aspects, adding the law school system cannot help but be financially burdensome to certain people, despite the scholarships and special admission programs.

Also on Thursday, the court unanimously ruled that in order to avoid a waste of manpower, it is constitutional to restrict the number of application times on the attorney-qualifying exam to five times within five years from when the applicant graduates from law school. 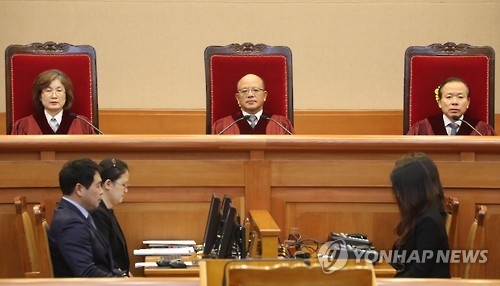