SEOUL, Sept. 29 (Yonhap) -- Unionized workers of South Korea's subway service ended their three-day strike Thursday after reaching a compromise with management on the implementation of a performance-based pay system.

Seoul's subway labor unions will end their walkout as of 6 p.m., three days after they launched the first joint strike with the railway union in 22 years, the Seoul Metropolitan Government said.

Thursday's deal calls for the managements and unions under the city government to seek an agreement on the adoption of a merit-based pay system. The two sides also reached a deal to not move forward with the firing of under-performing employees.

Still, workers of subway lines 1, 3 and 4 that are operated in collaboration with the Korea Railroad Corp. (KORAIL) will continue with their strike, as the railway union has yet to reach an agreement with management.

The city government said it is considering possible supplementary measures to minimize public inconvenience on lines 1, 3 and 4 until their employees go back to work.

The merit-based pay system is part of the Park Geun-hye administration's efforts to boost labor flexibility to create more jobs, especially for the younger generation.

The labor sector, however, is against the scheme, saying it will be used by companies to fire employees more easily. 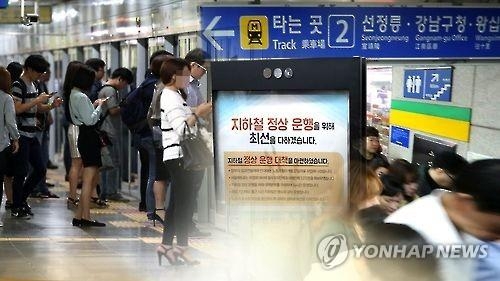 Seoul subway to operate normally after three days of walkouts

Seoul subway to operate normally after three days of walkouts