SEOUL, Sept. 29 (Yonhap) -- South Korea will announce a new site for an advanced U.S. anti-missile system in the southeastern part of the country to counter growing threats from North Korea, the defense ministry said Thursday.

"We are planning to release the evaluation results of three possible candidate locations to host the Terminal High Altitude Area Defense (THAAD) system (in Seongju County) at 2:30 p.m. tomorrow," the Ministry of National Defense said in a text message.

The announcement was scheduled to be released after parliamentary audits of the defense ministry and the Joint Chiefs of Staff were wrapped up by Wednesday.

Seoul and Washington had earlier picked the Seongsan anti-aircraft missile base in Seongju, 296 kilometers southeast of Seoul, to host the THAAD installation. But they began reviewing three other sites after local residents demanded a switch due to perceived health problems caused by the powerful radar waves emanating from the THAAD battery.

According to some defense sources, Lotte Skyhill Country Club in northern Seongju will likely be tapped. Located 18 kilometers north of the Seongju County center, the golf course sits 680 meters above sea level, about 300 m higher than the existing artillery base.

It's also more isolated from residential areas than the present missile base and could alleviate concerns that THAAD's radar would pose health problems for local residents.

The golf course location, however, will likely face opposition from the adjacent town of Gimcheon, since the radar would be pointing toward the nearby county. Gimcheon residents have already threatened "a full-scale protest" if the golf course is selected. 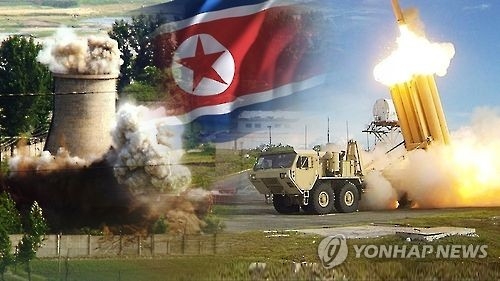 Another hurdle for the defense officials will be the purchase of the golf course. Business conglomerate Lotte owns the country club, and the price tag could be up to 100 billion won (US$90.6 million). Securing the budget to make the acquisition will require parliamentary approval.

The government has applied six principles -- operational effectiveness, resident health concerns, infrastructure, overall safety considerations, construction time and cost, and the required preparation time for installation -- in the selection of an alternative site.