The Dinos said Thames had dinner with his mother and had two cocktails. The club has informed the KBO of the incident.

"Thames understands the inappropriate nature of his behavior, and we'd like to apologize for the trouble this has caused," the club said.

The Dinos were playing a doubleheader with the Samsung Lions at home Thursday. Thames started the first game and went 3-for-4 with three RBIs in a 10-5 win. 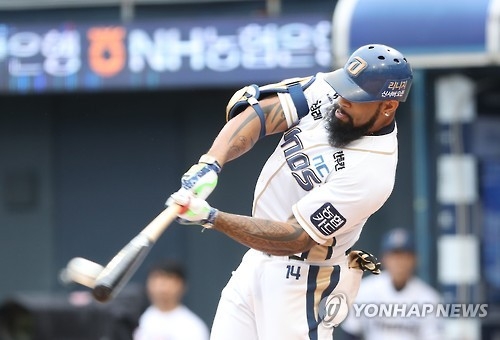 Thames was in the starting lineup for the second game but was lifted for a pinch hitter in the bottom of the first.

The Dinos have also been troubled by a match-fixing scandal involving their pitcher Lee Tae-yang who received a 10-month suspended jail term last month.

They are headed for their third straight KBO postseason, sitting in second place with a 78-54-3 (wins-losses-ties) record. In the KBO, the second seed gets the bye to the second round of the playoffs.