Production in the mining, manufacturing, gas and electricity industries rose 2.3 percent last month from a year ago, according to the report by Statistics Korea.

The August figure marks the fourth straight month of advance, following a 4.7 percent jump in May, a 0.8 percent gain in June and a 1.6 percent rise in July.

From a month earlier, industrial output retreated 2.4 percent in August, however, due to a sharp drop in auto production.

Production in the service sector added 4.7 percent from a year earlier, with a 0.7 percent on-month gain.

For all industries, output moved up 5 percent on-year in August but retreated 0.1 percent from a month earlier, the report said. 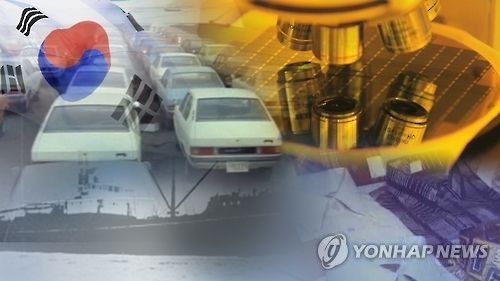 Retail sales continued their upbeat mode in August, rising 6 percent on-year and 2 percent from a month ago, as the scorching heat during the summer days boosted purchases of expensive home appliances, such as air conditioners.

But car sales fell for the second month in a row last month to drop 5.8 percent on-year due mainly to the government-led excise tax cut program that ended June 30.

"Figures related to private consumption have been in a positive mode for months as domestic demand seems to be recovering from a deep slump stemming from the Middle East Respiratory Syndrome," said Eo Woon-sun, director of the short-term industrial statistics division at Statistics Korea.

"And the record hot summer prompted demand for electronics, lending support to an on-month gain in August."

For the production side, output of semiconductors soared 27.5 percent in August to lead the overall increase in industrial output last month on rising demand for mobile chips for new smartphones like Samsung Electronics Co.'s Galaxy Note 7 and Apple Inc.'s iPhone 7.

But it was largely offset by a drop in car production caused by partial strikes at major carmakers, including industry leader Hyundai Motor Co.

According to the company, the walkout has brought in a loss of some 117,000 units of vehicles, worth 2.5 trillion won.

"The upturn in last month's exports is largely due to increased working days from a year earlier," the official said. "It's too early to say that the production side is safely on a recovering track."