SEOUL, Sept. 30 (Yonhap) -- North Korea's exports of coal to China reached a record high on a monthly basis last month despite sanctions imposed following a series of nuclear and missile tests, as the reclusive nation cut prices to boost its shipment to its strongest ally, a report showed on Friday.

According to the Korea International Trade Association (KITA), the North's exports of coal to China amounted to 2.46 million tons last month, the biggest since 1998 when related data began to be compiled.

The August figure marks a 35 percent rise and exceeds the previous monthly record of 2.34 million tons in March of the year, it said.

The average price of coals shipped to China is estimated at US$45.55 per ton in August, sharply down from $64.96 posted in January.

The average price in August is also 7.6 percent lower than China's overall import price of coals.

In terms of value, the North's shipment of coals to China reached $112 million last month, also soaring 27.3 percent from a year earlier.

China allows imports of coal from the North if the resource, one of the banned items under sanctions, is for private use.

The North's coal shipments to China account for some 40 percent of its overall exports to the neighboring country.

The association said the North's exports of steel and iron ore also surged 61.8 percent and 14.3 percent, respectively, from a year earlier to reach $1.9 million and $6.6 million.

The North, meanwhile, imported goods worth $337 million from China last month, also up 41.4 percent from a year earlier.

Some $1.3 billion worth of North Korea's mineral resources were sold in China last year, taking up 52.4 percent of North Korea-China exports of $2.48 billion. 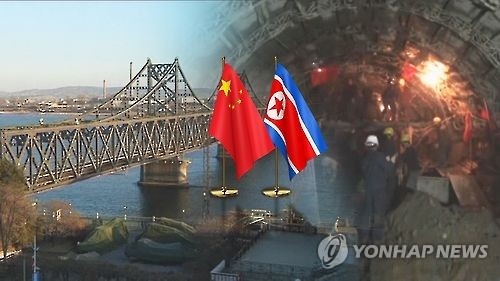