The meeting, which will be held under the theme, "Partners for Safeguarding Peace," will bring together some 30 attendees, including Gen. Vincent K. Brooks, who leads the USFK, the South Korea-U.S. Combined Forces Command and the U.N. Command.

"President Park plans to stress the solid South Korea-U.S. alliance and the importance of the allies' combined readiness posture at a time when strong anti-Pyongyang sanctions and pressure are needed in response to the North's continued provocations, including its fifth nuclear test," presidential spokesman Jung Youn-kuk told reporters.

Pyongyang has recently been ratcheting up military tensions on the peninsula by conducting the fifth and most powerful nuclear test on Sept. 9 and continuously threatening to conduct additional provocations.

The event is set to be held hours ahead of the planned announcement by Seoul and Washington of a final site to host a U.S. anti-missile system within Seongju County, 296 kilometers southeast of Seoul. A golf course in the county is expected to be selected for the deployment of a Terminal High-Altitude Area Defense battery. 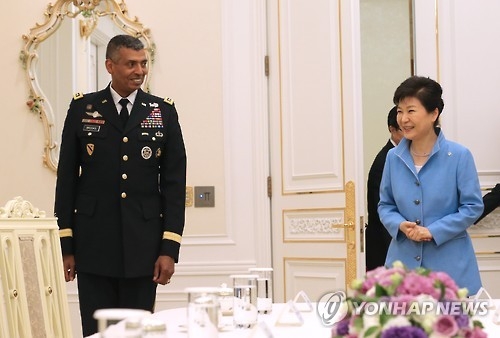