During a luncheon with senior officials of the U.S. Forces Korea (USFK), Park also portrayed the defiant state's threats as a "dagger to our throats," reiterating the urgency of the growing security challenge from the recalcitrant regime.

The North has recently been heightening cross-border tensions with its bellicose rhetoric and provocations, including its fifth and most powerful nuclear test on Sept. 9 and recent ground test of a new rocket engine thought to be designed for an intercontinental ballistic missile.

"The most effective means to curb North Korea's fanaticism is the combined defense posture based on the South Korea-U.S. alliance," she said during the luncheon that brought together some 30 attendees, including USFK commander Gen. Vincent K. Brooks. 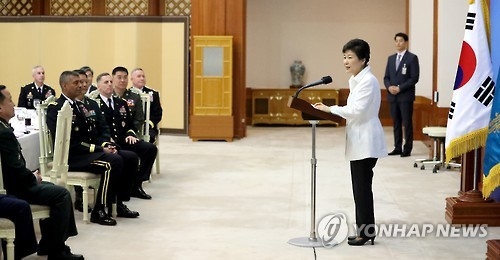 "North Korea's threat is like a dagger to our throats, a serious threat that will one day cause great harm to our peoples if not dealt with urgently," she added, pointing out that the international response to the North's provocations should be "completely different" from that of the past.

The South Korean commander-in-chief also vowed to take "all measures available" to stop the North's military threats from further growing, stressing that the security situation on the peninsula is "more dire than ever before."

"In order to prevent North Korea from going to the point of no return, I will strive to come up with all possible measures in cooperation with the international community," she said.

Noting that South Korean troops are now operating shoulder to shoulder with the U.S. forces to help maintain world peace, Park said that the bilateral alliance has been evolving into a "comprehensive, global strategic" partnership.

"In the future, our two countries will move forward together on a path toward world peace," she said.

Park, then, spelled out the USFK as "unbreakably special friends of Korea," highlighting her resolve to strengthen the alliance.

"We are honored to serve as an alliance defending the Republic of Korea and our national interests," he said. "And our alliance is unshakable, it is stronger than ever, and our actions as well as words should make that very clear."

"We will build on the lessons and readiness gained from it (joint military drills) to ensure that we as an alliance will be successful and victorious if we are called to fight," he said.

Before the event took place, Seoul and Washington effectively picked a golf course in Seongju County, 296 kilometers southeast of Seoul, as the site for the deployment of a Terminal High Altitude Area Defense battery. The allies seek to station the battery in the county by end-2017 to better counter Pyongyang's nuclear and missile threats. 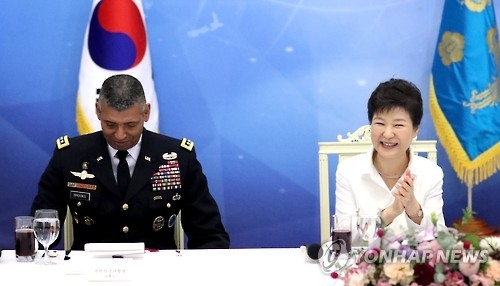