SEOUL, Sept. 30 (Yonhap) -- South Korean football champions Jeonbuk Hyundai Motors have been deducted nine points in their current campaign after their scout was convicted for bribery.

The K League, the operator of the pro football league, said on Friday its disciplinary committee has decided to impose the penalty on Jeonbuk for the 2016 season. The two-time defending champions also have to pay a 100 million won (US$90,700) fine.

The decision was announced two days after the Busan District Court sentenced a Jeonbuk scout, identified only by his surname Cha, to a six-month suspended jail term. Local prosecutors indicted him in May on charges of bribing two referees in 2013.

"Bribing referees is a degrading treatment of referees' character, a breach of faith for fans and a contemptuous act against football," said Cho Nam-don, who leads the league's disciplinary committee. "Such an act cannot be tolerated."

Jeonbuk are currently the leaders in the top-tier K League Classic with an undefeated record of 18 wins and 14 draws, 14 points ahead of FC Seoul with 68. Teams are awarded three points for a win, one point for a draw and zero for a loss.

With the penalty, Jeonbuk now have 59 points, just five up on FC Seoul (16 wins, six draws and 10 losses) with six matches remaining.

The K League previously slapped Gyeongnam FC with a 10-point deduction and a 70 million won fine for the 2016 season after their club executives were also convicted of bribery last year. Under league rules, Jeonbuk could have faced relegation to the second division, or even expulsion from the league.

Cho, who is also an attorney, said, however, Jeonbuk's case is not more severe than Gyeongnam's considering the scale of the corruption.

Cho also explained it couldn't mete out punishment earlier because the Jeonbuk scout had consistently denied his allegations. He added that in Gyeongnam's case, the suspects admitted their charges and the prosecutors gave the league the necessary information quickly.

"We couldn't decide our punishment without confirming all the facts," he said. "We needed to secure objectivity in our decision."

Cho said the disciplinary committee concluded that there was no evidence of match-fixing although the two referees accepted the bribes. The six committee members reviewed eight matches in 2013 that the two referees handled, but said none of those matches were fixed.

In 2013, Jeonbuk finished third in the league with a record of 18 wins, nine draws and 11 losses. They earned 12 points in eight matches that the convicted referees worked.

Cho also pointed out Jeonbuk's haughty attitude. He said even if the scout committed the bribery on his own, Jeonbuk are responsible for negligence in employee management.

"Jeonbuk didn't cooperate well with our investigation," he said. "They didn't take any responsible action even though South Korean football's reputation has suffered. Jeonbuk are one of the clubs that represents South Korean football and because they damaged our reputation, we thought they should be given proper punishment."

Jeonbuk are one of the premier clubs in South Korean pro football. They have won the first-tier K League Classic title four times, including three of the past five seasons, and triumphed at the Asian Football Confederation (AFC) Champions League in 2006.

Jeonbuk are also one step closer to reaching the AFC Champions League final this year after beating FC Seoul 4-1 in their first semifinal leg Wednesday.

"We're deeply sorry for troubling our fans with this incident," Jeonbuk said in a statement. "All our employees, players and coaching staff feel remorse for this incident." 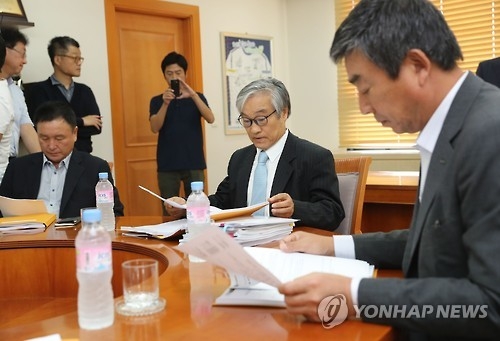