SEOUL, Sept. 30 (Yonhap) -- The share of manufacturing jobs in South Korea has dropped to the lowest in nearly three years, hit by a continued fall in export growth and a corporate restructuring drive, data showed Friday.

The number of workers in the manufacturing sector totaled 4.41 million in August, accounting for 16.7 percent of all South Korean employees, according to Statistics Korea.

It marks the lowest since October 2013, when the ratio stood at 16.5 percent.

The proportion rose close to 18 percent early this year, but it has been on the decline since recording 17.5 percent in March. 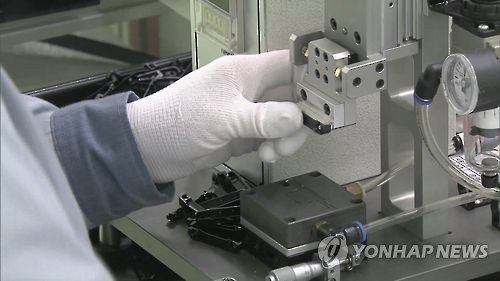 Experts pointed out the nation's manufacturing industry has hired more irregular workers in recent years, while scaling down the employment of full-time ones.

"So far, the increase in the number of part-time workers has served as a buffer against the impact to factory jobs," said Park Jin-hee, a senior researcher at the Korea Employment Information Service. "But the number of manufacturing jobs is beginning to decrease in earnest due to a drop in factory operating rates, lackluster exports and full-fledged corporate restructuring."