The fire, which broke out after Coast Guard officers boarded the boat Thursday, left three Chinese fishermen dead, with 14 others, including the captain, being rescued.

The Mokpo Coast Guard, in charge of the case, said the boat had no permit to fish in South Korea's EEZ. It said the crew members are being questioned on why they did not follow orders to stop.

The 102-ton Chinese vessel was sailing some 70 kilometers southwest of Hong Island, west of Mokpo, when the Coast Guard ordered it to stop for identification, but the boat tried to flee the area.

The Coast Guard said that when its officers did manage to board the boat, some members of the crew locked themselves into the steering house and engine room. These crewmen then continued to sail the boat with officers on board despite repeated orders to stop. When the orders were ignored, the officers threw non-lethal stun grenades into locked compartments to force the people out.

The Coast Guard believes those steps were necessary to prevent injuries to its officers in case the Chinese crew resorted to violence.

Authorities said they will try to determine what caused the fire. Local forensic experts will check the boat thoroughly to determine why it suddenly caught fire when it arrives in Mokpo.

Investigators also said they will seek autopsies of the deceased crew members to determine the exact cause of death.

This was only the latest in a series of incidents between the Coast Guard and Chinese fishing boats. Last September, a Chinese boat even headed for the Northern Limit Line (NLL), the northern sea border area, with Coast Guard officers on board trying to stop its illegal fishing. The officers managed to stop the boast only a couple of kilometers away from the NLL.

Clashes between local law enforcement and Chinese fishermen have been violent and fatal. In October 2014, a Chinese captain was shot to death while resisting apprehension. The Coast Guard was trying to stop one boat, and then crewmembers from four other Chinese boats came on board and started throwing beer bottles at the South Korean officers.

In December 2011, Coast Guard office Lee CHeong-ho was fatally stabbed by a Chinese captain during a raid on a vessel fishing illegally in waters off Incheon. 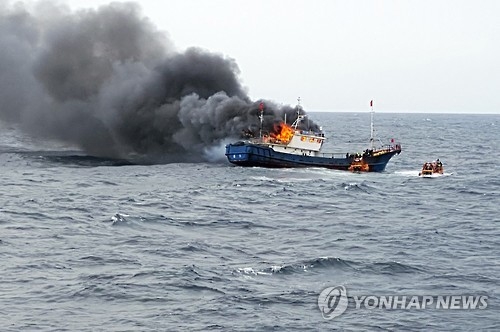