SEOUL, Sept. 30 (Yonhap) -- SoftBank Group CEO Masayoshi Son on Friday expressed his intention to invest some 5 trillion won (US$4.54 billion) in South Korea's new industrial sectors such as artificial intelligence over the next decade, during his talks with South Korean President Park Geun-hye.

At the meeting held at the presidential office Cheong Wa Dae in Seoul, the head of the Japanese tech giant also said he would seek to invest in startups or small- and medium-sized enterprises (SMEs) jointly with the South Korean semiconductor fund.

Samsung Electronics Co., SK and Korea Development Bank have jointly created a fund to foster South Korean startups and SMEs specializing in semiconductors. They aim to raise 200 billion won by the end of this year.

As Park and Son discussed the investment, Son "actively" expressed his desire to invest in South Korean enterprises specializing in the Internet of Things, smart robots, mobile technologies, Internet-related services and artificial intelligence, the presidential office said in a press release.

The chief executive stressed that Seoul has been paying keen attention to new industrial sectors, and that South Korean firms in these sectors and SoftBank can create a "synergic effect" if they closely cooperate.

Son, in turn, expressed his willingness to invest in the firms, which the fund has so far invested in, or invest in South Korean companies through a partnership to explore overseas business opportunities.

The South Korean leader also pointed to the possibility of SoftBank Group using its global network to offer job opportunities to South Korean young adults. The Japanese conglomerate has more than 700 subsidiaries across the world.

During their talks, Son explained to Park his ambitious "Asian Super Grid" initiative, which aims to promote energy integration through an extensive grid linking the electric power systems of South Korea, China, Japan and other countries with power generated from renewable energy sources such as wind power in Mongolia.

Park praised the initiative as a "good alternative" to respond to climate change, while Son emphasized that energy cooperation among nations would help promote peace in Northeast Asia, long plagued by historical and territorial feuds.

Park, in addition, explained to Son South Korea's policy focus on nurturing new energy industries through various projects, including those to build eco-friendly energy towns and energy self-sufficient islands. She, then, called on the CEO to consider investing in South Korean firms armed with eco-friendly technologies. 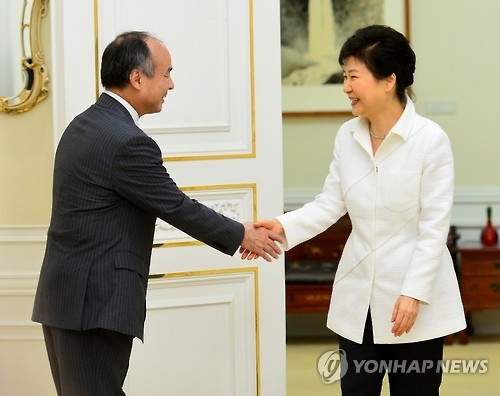