"We have conducted a simulation-based evaluation on three alternative sites in Seongju. The test results showed the Lotte Skyhill Country Club is the most optimal site for THAAD in terms of six principles," Moon Sang-gyun, a spokesman for the Ministry of National Defense, told Yonhap News Agency. 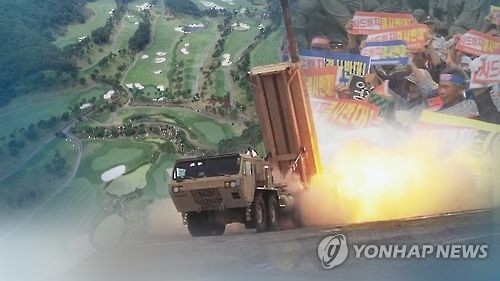 Other defense officials went to Seongju and the city of Gimcheon to explain the standards on which the decision was made to local political leaders. Seongju largely accepted the revised offer, but Gimcheon refused to have a meeting with the officials.

Defense ministers of South Korea and the United States approved the results of the month-long evaluations jointly conducted by the allies that ended on Sept. 27.

"As it requires a whole new infrastructure to host a THAAD battery in Mt. Kkachi and Mt. Yeomsok, it is hard to meet the scheduled deployment year of 2017. But in case of the golf course in Mt. Dalma, it is possible to deploy the THAAD system there in time as it is already equipped with the necessary infrastructure for the installation," the report said.

The defense ministry belatedly released a statement which outlined its decision, although there was not a press briefing.

Following its decision, the ministry plans to acquire the golf club from Lotte Group, and will have further consultations with the U.S. to complete the deployment within the targeted timeframe and proceed with planning and construction work, the statement said.

"The government is determined to finish the THAAD installation within the next year without fail to better protect the security of the country and life of its people from the evolving nuclear and missile threats from North Korea," it said. 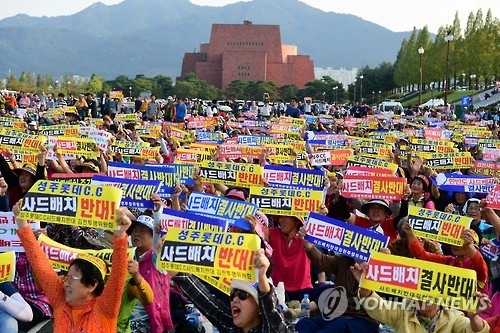 When the allies picked the site for THAAD in July, they evaluated publicly-owned properties only due mainly to cost reasons. Back then, the golf course and other privately-held assets there were not even considered as candidates, the ministry said.

Local residents in Seongju have strongly protested against the previous decision, demanding a shift in the site to deploy a THAAD battery be changed due to perceived health problems caused by the system's powerful X-band radar.

In response, the military examined the three alternate sites to check if they were suitable for the U.S. anti-missile system.

The golf course, 18 kilometers north of the Seongju County center, sits 680 meters above sea level, about 300 m higher than the previously selected anti-aircraft missile base. It's also more isolated from residential areas than the missile base and could alleviate local residents' concerns that THAAD's radar could cause them health problems.

The golf course location, however, could cause problems for the adjacent city of Gimcheon, since the radar would be pointing in the direction of the nearby city. Gimcheon residents already threatened "a full-scale protest" if the golf course is selected.

Reflecting concerns raised, a ruling party lawmaker whose constituency is Gimcheon, held a press conference at the National Assembly.

"I will move my residence to near the THAAD base to show its radar waves do not pose a threat to nearby residents," Rep. Lee Chul-woo from the Saenuri Party said. He stressed that the electromagnetic fields from THAAD are weaker than those emanating from mobile phones.

Another hurdle for the defense officials will be the purchase of the golf course. Business conglomerate Lotte Group owns the country club, and the price tag could fetch over 100 billion won (US$91 million). Securing the budget to make the acquisition will require parliamentary approval.

In a short text message, Lotte Group said it will give serious consideration given the country's security conditions on the Korean peninsula. "We will closely consult with the defense ministry as to the next steps."

This year alone, Pyongyang has escalated its saber-rattling by detonating two nuclear devices and launching a series of ballistic missiles as the communist regime marches toward its stated goal of developing a nuclear-tipped intercontinental missile that can reach the U.S. mainland.