SEOUL, Sept. 30 (Yonhap) -- The owner of the South Korean baseball club Nexen Heroes has been indicted on charges of fraud and embezzlement, authorities said Friday.

The Seoul Central District Prosecutors' Office said it indicted Lee Chang-suk, 50, without physical detention for not handing over a 40 percent stake in the ball club to a Korean-American businessman that he had promised in return for 2 billion won (US$1.8 million). The prosecutors also indicted Namkoong Jong-hwan, the general manager of the Heroes, without physical detention, for aiding Lee.

The Heroes joined the Korea Baseball Organization (KBO) before the 2008 season, replacing the cash-strapped Hyundai Unicorns. Since they didn't have the money to pay the 12 billion won membership fee to join the top-tier pro baseball league at the time, Lee approached Hong Sung-eun, chairman of the Atlanta-based real estate developer Rainier Group, to invest the money in exchange for the stake.

However, Hong didn't receive his share and he filed a petition against Lee with prosecutors in May. Investigators then raided the home and office of Lee, and also placed him under an overseas travel ban.

Lee and Namkoong are also suspected of embezzlement and professional negligence. The prosecutors said they doctored accounting books from February 2010 to January 2016 and embezzled some 2 billion won.

Two executives inflicted financial losses worth 1.7 billion won on the company by receiving excessive bonuses from their advertisement deals. They also lent 200 million won without collateral to a businessman for opening a hostess bar, according to the prosecutors.

The prosecutors added Lee also funneled the corporate funds of 2.8 billion won in gift coupon deals, while Namkoong used 1.3 billion won worth of company money for personal use.

The KBO previously said if Lee's allegations turn out to be true in court, he can be removed from the organization's board. Lee, who is also chief executive officer of the Heroes, is one of 12 directors on the KBO board. 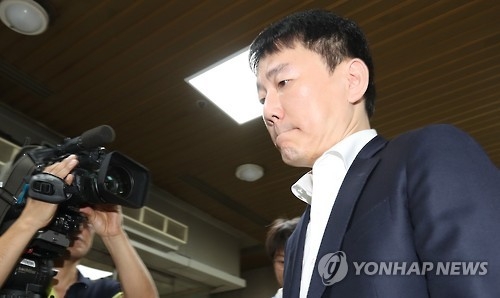