SEOUL, Sept. 30 (Yonhap) -- For South Korean football club Jeonbuk Hyundai Motors, this season could have been their most successful one to date.

Gunning for a three-peat, Jeonbuk are currently the leaders in the top-tier K League Classic with an undefeated record of 18 wins and 14 draws. They are just six matches away from finishing the season without a loss, an unprecedented feat since the league started in 1983.

At the Asian Football Confederation (AFC) Champions League, Jeonbuk are one step closer to reaching the final after beating FC Seoul 4-1 in their first semifinal leg Wednesday. They are looking for their first AFC Champions League (ACL) title since 2006.

Since they were founded in 1995, Jeonbuk have never won both domestic league and the ACL in the same year. However, even if they go on to claim both titles, the 2016 season will not be remembered as a glorious one.

On Friday, the K League's disciplinary committee slapped Jeonbuk with a nine-point deduction and 100 million won (US$90,700) fine after one of the club's scouts was convicted for bribing two referees in 2013. The decision came two days after the Busan District Court sentenced the scout, identified only by his surname Cha, to a six-month suspended jail term.

The penalty slashed Jeonbuk's points from 68 to 59. They are now only five points ahead of No. 2 FC Seoul, who have 16 wins, six draws and 10 losses with six matches remaining.

The domestic title defense isn't even the club's biggest concern. Now, Jeonbuk's legacy has been spoiled and fans will doubt whether the club's achievements in the past and the present are trustworthy.

In 2013, Jeonbuk finished third in the league with a record of 18 wins, nine draws and 11 losses. During that season, current head coach Choi Kang-hee rejoined Jeonbuk after leading the South Korean national team for 18 months.

Fortunately for Jeonbuk, the K League disciplinary committee concluded that there was no evidence of match-fixing in 2013 although the two referees accepted the bribes.

"If we found that the matches were fixed, the punishment on Jeonbuk would have been more severe," said Cho Nam-don, who heads the league's disciplinary committee.

However, Jeonbuk's attitude during the investigation may further anger fans. According to Cho, Jeonbuk were not cooperative at all as they also sent their documents late. He also pointed out that Jeonbuk players and coaching staff have shown little respect to referees' calls during matches.

Just minutes after the league confirmed the penalty, Jeonbuk released a statement to apologize for the incident.

Choi and general manager Lee Chul-geun both hinted at resignations when the bribery scandal was first reported in May, saying they will take responsibility. It is widely expected that the two will announce their future moves after the season is over.

If they both depart Jeonbuk, it will be the first such double resignation in K League history over a scandal of this type.

It also means the end of so-called "Jeonbuk Dynasty." Choi and Lee have been the backbone of Jeonbuk's success in the 2000s. They have produced four domestic league titles and the 2006 ACL crown. Choi first came to Jeonbuk in 2005, two years after Lee arrived at the club as secretary-general. 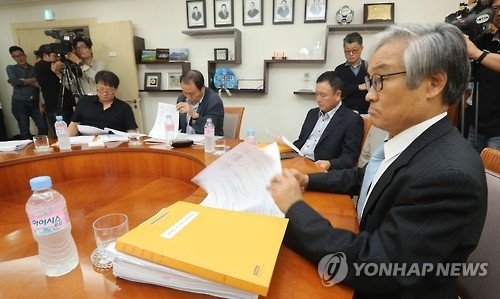 The bribery scandal involving the league's top team isn't also good news for the K League, which is trying to become one of the world's top-10 football leagues by 2020. After a huge match-fixing scandal in 2011, in which more than 50 indicted players received lifetime bans, the league has been trying to revive football fever in the nation.

Earlier speculation had it that Jeonbuk might face demotion to the second-division K League Challenge, just like the Italian giants Juventus, with the K League seeking to send a message on corruption. Juventus were relegated to Serie B for their involvement in a massive match-fixing scandal in 2006, also known as "Calciopoli."

However, Jeonbuk's punishment was not even as severe as that on Gyeongnam FC, who were given a 10-point deduction and a 70 million won fine for the 2016 season after their club executives were also convicted of bribery last year.

Cho said considering Jeonbuk's status in South Korean football, they had to be punished properly for the bribery scandal. However, since the scale of the corruption is smaller than that of Gyeongnam's or Juventus', the league decided to settle for nine-point deduction and a 100 million won fine.

"We had to think about the objectivity and consistency of the punishment level," he said.

The committee's decision came just a day after the Korea Professional Sports Association, whose member includes the K League, and the Ministry of Sports, Culture and Tourism vowed zero tolerance for corruption. The new measures will go into effect next January.

The K League will likely face criticism that the penalty on Jeonbuk may not have been enough to prevent corruption in the future and send warning to others. Still, it vowed to put forth all-out efforts to stop such corruption in the sport.

"We can't let the K League remain in the same spot because of the dark past." said Huh Jung-moo, deputy commissioner of the K League. "We must wipe out wrongdoings that have been regarded as customary."