(ATTN: ADDS club's own penalty in para 10; details at bottom)
By Yoo Jee-ho

SEOUL, Sept. 30 (Yonhap) -- Reigning South Korean baseball league MVP Eric Thames has been suspended for nine games, including the postseason, after getting caught driving under the influence of alcohol.

The Korea Baseball Organization (KBO) handed down the ban on the NC Dinos slugger Friday. The former major leaguer faced a police investigation in Changwon, South Gyeongsang Province, on Monday, two days after getting caught driving with a blood alcohol content of 0.056 percent. The legal limit is 0.050 percent.

Thames will miss the eight remaining regular season games, plus one game in the postseason. He has also been fined 5 million won (US$4,520).

The Dinos, at 79-54-3 (wins-losses-ties), have clinched second place in the 10-team league, and earned the bye to the second round of the playoffs.

"One postseason game carries the weight of multiple regular season games," said KBO Secretary-General Yang Hae-young, who presided over the disciplinary committee meeting Friday. "With the Dinos having advanced to the second round, we believe this is a fairly severe penalty."

The Dinos were also fined 10 million won for their handling of the case. They came under fire for withholding information on Thames' incident from the media and also from their own manager, Kim Kyung-moon, until Thursday evening, though they'd learned of the development Saturday.

The Dinos played a doubleheader at home Thursday, and Thames actually played in the first game and was in the starting lineup in the second one. He was lifted for a pinch hitter in the first inning after a team official made the announcement in the press box.

The club said Thames had dinner with his mother and had two cocktails Saturday.

Separate from the league's penalty, the Dinos imposed a fine of $5,000 on Thames and also ordered him to complete 50 hours of community service.

The Dinos have also been troubled by a match-fixing scandal involving their pitcher Lee Tae-yang, who received a 10-month suspended jail term last month.

Kim, who is in the final year of his contract with the Dinos, said after Thursday's doubleheader that it was his fault that a player got into off-field trouble and hinted at resignation.

"I think I have to take the responsibility as the manager," he told reporters. "After the end of the season, I will hold myself accountable as necessary." 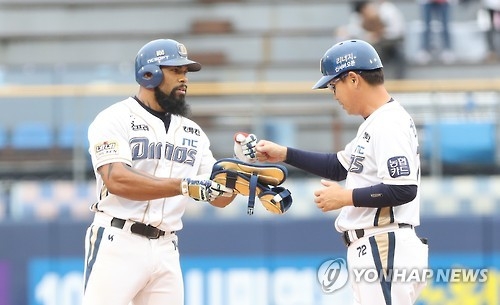