The World Communion of Reformed Churches (WCRC), based in Hanover, Germany, sent a delegation to Pyongyang from Saturday to Thursday to meet with North Korean church leaders in the wake of last month's devastating floods and heightened tensions following the North's fifth nuclear test. 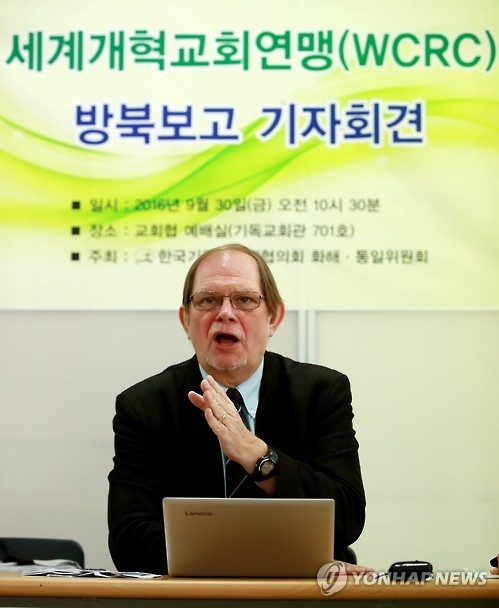 "The delegation heard the urgent wish for the de-escalation of provocation and tension, and the need to reestablish dialogue and negotiations and the desire to change the armistice into a peace treaty," Ferguson said during a press conference here, shortly after flying in from Pyongyang via Beijing. "We were told firmly that North Korea remains committed to peace and reunification in the face of the current situation."

Seoul has rejected such claims by Pyongyang, saying the communist country should first stop its nuclear and missile development and then return to the negotiating table.

In Pyongyang, the delegation also had a protocol visit with Kim Yong-dae, vice president of the Supreme People's Assembly, North Korea's rubberstamp parliament.

The reverend said they did not discuss the Sept. 9 nuclear test.

"We want the end of nuclear weapons. We want all of Asia to be a nuclear-free zone, and the whole world to be free of the threat of nuclear escalation," he said. "But this will require creating a platform of dialogue where all countries feel heard, honored and respected."

The North Koreans did not make a specific request for aid, but delivered their concerns about the flooding in North Hamkyong Province, he added. According to some estimates, the floods left more than 500 people killed or missing and more than 140,000 others stranded.

"Every effort is being made before winter comes so that people can have houses and a secure place to live," Ferguson quoted the North Koreans as saying. "In our visits to the churches in Pyongyang, we heard that many of the prayers and expressions of concern were directed to the welfare of the people affected."

The WCRC has informed its community of 80 million Christians in 109 countries of the disaster and sought their support through prayer and resources.

Ferguson also said the WCRC has provided financial assistance to North Korea to help with the relief efforts, but did not disclose the amount. 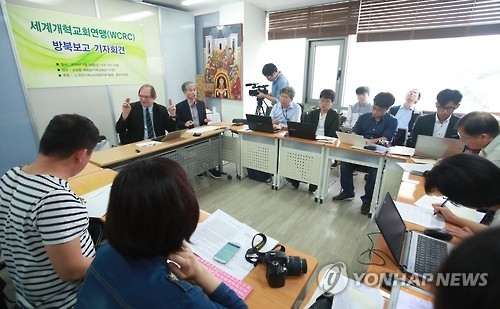