Lee Hae-jin, chairman of the board of directors and the founder of Naver, unveiled the company's vision as the company and its mobile messaging affiliate, Line Corp., announced a plan to invest 100 million euros (US$112.2 million) in a French venture fund set up by France's former South Korean-born minister, Fleur Pellerin.

Lee told reporters that he "thinks a lot about" the European market as the next foreign investment destination for Naver and Line.

The investment in the "K-Fund 1," which invests in European technology startups, is "not a simple investment but a matter of strategic business entry," Lee said. 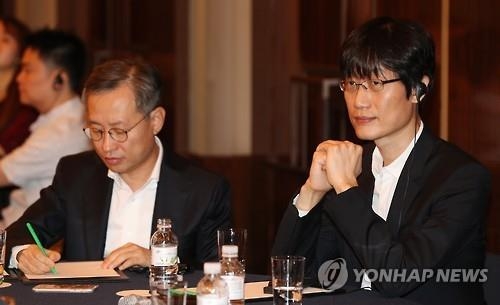 The fund is being managed by Korelya Capital, which was set up by Pellerin to help South Korean firms make investments in French firms.

Line's mobile messaging app is hugely popular in Asia, including Japan and Thailand, but the company seeks to expand the messaging app's presence into other parts of the world.

The fund will invest in European technology startups in the fields of artificial intelligence, big data and online services.

Pellerin said Naver and Line have become a good example for start-ups in Europe.

The former French culture and communications minister said one of the most challenging tasks in the digital age is to increase the diversity of the Internet ecosystem at a time when a few giants, such as Google, bolster their dominance.

Pellerin was adopted by a French family in 1973, six months after her birth. She served as an adviser on the campaign team of now-French President Francois Hollande, who appointed her to the Cabinet post in 2012.
(END)