SEJONG, Sept. 30 (Yonhap) -- South Korea's finance ministry said Friday that it plans to sell 1.1 trillion won (US$1 billion) worth of Treasurys with a maturity of 50 years next month, the country's longest-ever dated state bonds.

The bonds will be sold at 1.535 percent, 4 basis points higher than the 1.495 percent for the benchmark 10-year Treasurys, according to the Ministry of Strategy and Finance.

The ministry said it will pick a lead manager next week before the bonds are sold on Oct. 11.

Kookmin Bank and nine other brokerage houses were picked as syndicates for the upcoming Treasurys sales.

In August, the government decided to sell state bonds that mature in 50 years, saying that the country's fiscal health and strong macroeconomic fundamentals can help it successfully sell the 50-year bonds.

The South Korean government currently sells five types of state bonds with maturities ranging from three-year debts to 30-year bonds, with those with a maturity of three years and five years accounting for 46 percent of the total bond sales.

Bonds with the longest maturity of 10 years and longer made up 27 percent, the ministry said. 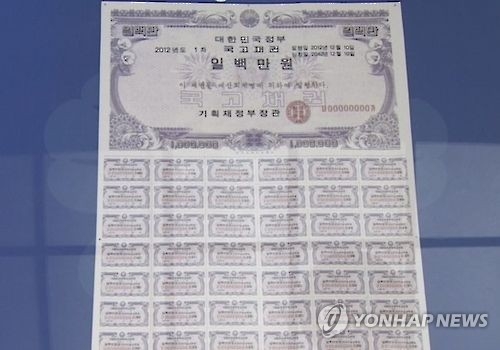 S. Korea to sell 1.1 tln won worth of 50-yr Treasurys next month

S. Korea to sell 1.1 tln won worth of 50-yr Treasurys next month