SEOUL, Sept. 30 (Yonhap) -- South Korea attracted more than US$300 million in foreign investment during an annual event earlier this week, with additional deals expected in the coming months, a government ministry said Friday.

Foreigners had one-on-one meetings with their potential business partners here for potential contracts worth a total of $2.89 billion, or 3.1 trillion won, during the Seoul event that ended Thursday.

Three foreign companies formally expressed their intent to invest over $300 million total, according to the ministry.

The number of participants in the event, the 12th of its kind, totaled 1,425, up 24 percent from last year.

In particular, 334 foreign investors, including 81 Chinese representatives from 70 companies, traveled to Seoul for the event.

Many of them are involved in ICT and other new industries as well as the service sector such as finance and tourism.

"China's investment in South Korea, focused on a few businesses like real estate development, is expected to diversify into new industries and service businesses," a ministry official said. 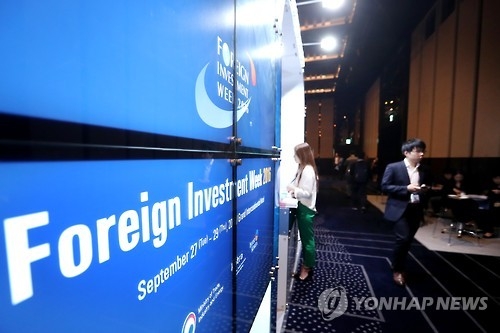