CHANGWON, South Korea, Sept. 30 (Yonhap) -- An annual festival designed to understand and share cultural values between Koreans and migrants opened for a three-day run in South Korea's southeastern city of Changwon on Friday, introducing the cultures of 14 nations.

The 11th Migrants' Arirang Multicultural Festival (MAMF) started with performances of art troupes from four nations, including this year's guest of honor Cambodia, to mark its opening at the Seongsan Art Hall in the afternoon.

In particular, the Cambodian troupe performed the "Apsara Dance," a traditional dance designated as a UNESCO intangible cultural asset. The Cambodian culture minister visited the country to attend the festival.

Major events include an academic seminar, a migrants' song festival, a multicultural street parade and the Asia Pop Music Concert.

An international seminar titled "Migrants' Work, Life and Cultural Diversity" will be held at Changwon University on the event's second day.

On the final day, migrants, dressed in their respective traditional costumes, from 12 nations, including Nepal, Mongolia, China, Vietnam, Uzbekistan and Thailand, will join the parade, the centerpiece of the festival, on the city's central street.

Eight nations will participate in the Asia Pop Music Concert on that day, with South Korea's Yoon Do-hyun, the MAMF promotional ambassador, and his rock band to give a celebration concert. 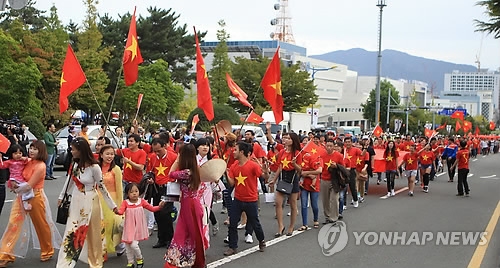 Some 220,000 visitors are expected to enjoy the festival, the event's organizers said.
(END)