SEOUL, Sept. 30 (Yonhap) -- Kim Young-ran, a former Supreme Court justice and main architect of an anti-graft act, voiced hope Friday that the act, which took effect earlier this week, will take root and bring about a positive change in South Korea's society.

Speaking to reporters three days after the Improper Solicitation and Graft Act went into force, Kim, a law professor at Seoul's Sogang University, said that she will watch how society will undergo changes with the implementation of the landmark law.

The law was first conceived during a Cabinet meeting in June 2011 where Kim, then the head of the Anti-Corruption and Civil Rights Commission, raised the need for the enactment of legal procedures to promote a "fair society" free from corruption.

The so-called Kim Young-ran law bans public servants, educators and journalists from offering or receiving free meals, gifts or money for contributions or condolences that exceed 30,000 won (US$27), 50,000 won and 100,000 won, respectively.

"Like others, my stance is that we should watch how society will change (as the law is being enforced)," she told reporters. "As we put the anti-graft law into practice, (we) should take steps for the law to take root."

Kim has long been reluctant to speak with the media to discuss the new law, apparently mindful of the possibility that her comments could fuel confusion amid lingering controversy over it.

Critics have said that the law would seriously hurt domestic consumption, and that it would undermine a long-standing culture that features generous exchanges of gifts or meals as a gesture of hospitality or the expression of affection towards one another.

In an interview with Yonhap News Agency, Kang Ji-won, Kim's husband and a lawyer, said that the task facing the nation is how to get the law entrenched in South Korean society. 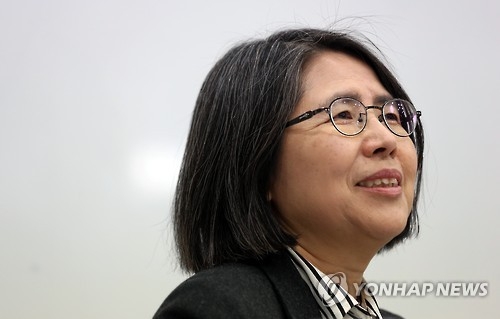