During her talks with Sumitra Mahajan, the speaker of Lok Sabha, the lower house of India's bicameral parliament, Park also asked India to support the ongoing efforts to induce a change in North Korea's "strategic calculus" and pressure it to renounce its nuclear ambitions.

"Park stressed India as a natural partner for regional peace and prosperity," Cheong Wa Dae said in a press release.

"(She) called on it (India) to work together to produce outcomes of practical cooperation commensurate with the 'special strategic partnership' set at last year's summit with (Indian) Prime Minister (Narendra) Modi," it added.

Noting a series of global economic challenges such as weak growth and the recrudescence of trade protectionism, Park said that now is the time when the two nations should work together to expand bilateral trade and investment and help stabilize the volatile global financial market.

On the economic front, Mahajan forecast that there would be progress this year in the ongoing bilateral negotiations to improve the Comprehensive Economic Partnership Agreement (CEPA) -- a type of FTA that emphasizes two-way economic cooperation on top of market opening.

Touching on Pyongyang's growing military threats, Park renewed her criticism of the communist regime "squandering" its scarce resources on nuclear and missile tests while turning a blind eye to North Koreans suffering from the damage from recent torrential rains and other economic hardships.

The president, moreover, underscored the importance of the international community putting up a united front against Pyongyang's will to continue to develop nuclear arms that would threaten peace on the peninsula and beyond.

Park and Mahajan shared the view that the North's potential transfer of nuclear and missile technologies and fissile materials to terrorists will pose a threat to the security of the entire world, the press release said. 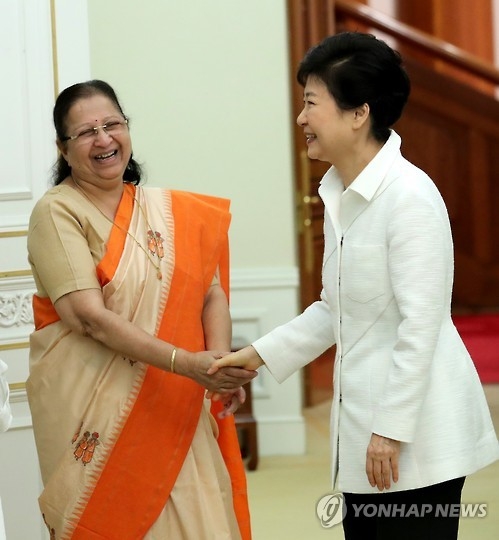