SEOUL, Sept. 30 (Yonhap) -- K-pop fans from all over the world gathered on one of Seoul's busiest streets Friday night to watch their favorite stars in action.

It was a rare opportunity to see 25 of the country's top artists, including SHINee, CNBLUE and INFINITE, in a single concert marking the opening of the Gangnam Festival 2016, and if that meant waiting in line from 7 a.m., it was a price some were more than willing to pay.

"It was really, really enjoyable," said 22-year-old Shane Haddad from Las Vegas, who had come at 10 a.m. to get a ticket. "I was really happy to see Red Velvet. Red Velvet is one of my favorite groups."

Throughout the 100-minute show, it was obvious that Haddad's passion for K-pop went far deeper than the five-member girl group. Jumping up and down, he took photos of each of the artists on stage and cheered for every performance.

Speaking in both Korean and English, the college student who also calls himself by the Korean name Kim Seung-hyeon said he runs a YouTube site (www.youtube.com/shanesnh) dedicated solely to K-pop. With some 38,000 subscribers, the site is also partnered with the South Korean entertainment company CJ E&M.

"My dream is to become an English teacher here," Haddad said. "I even donated blood five times and sold two gold rings to raise the money I needed to come back." 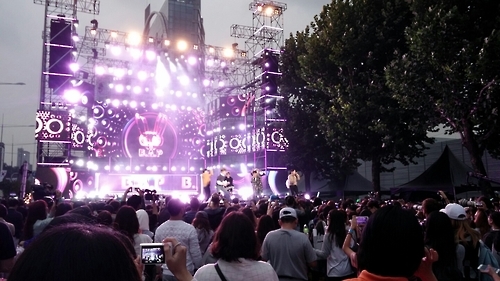 That passion was shared by many others on Yeongdong-daero, a 14-lane street that was half blocked for the show.

"I'm here to see SHINee," said 31-year-old Casper Asperin from the Philippines. "I did travel to Korea to see their concert and be here for their comeback. This happened to be one of their stages."

The five-member "hallyu" band held a series of solo concerts in Seoul early this month ahead of the release of their new album next week, and Asperin was at one of those concerts, too.

"It's actually very exciting to see the culture," she said. "It's different from how we watch it on YouTube or on television. You get to feel the energy of the fans and the performers, so it’s different."

Asked who her favorite member was, she added, "Tae-min. Because he's a good dancer." 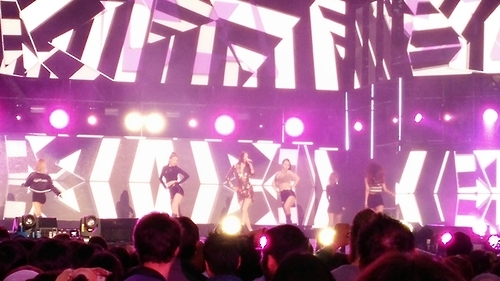 As each team took the stage to growing screams and cheers, camera clicks went off in every direction, with some fans fitting on extra lenses to their cameras or placing them on tripods to get the best shots possible. The night sky lit up with bright shining stage lights and fireworks, not to mention the glow sticks of the crowd.

On one side was a raised platform for dignitaries in the audience, including Culture Minister Cho Yoon-sun and Trade Minister Joo Hyung-hwan. The ministries joined with Gangnam Ward to host the four-day extravaganza which includes a grand sale, an international marathon, and various festivals for food, dance and fashion.

Flore Moulanier, a 21-year-old exchange student from Paris, said she heard about the concert from her roommate and decided to come as a SHINee fan of six years.

In an apparent indication of their global popularity, the group performed the finale of the show, although Moulanier's favorite member Onew could not take part.

Onew injured a foot during the band's last concert early this month.

"I've liked them since their debut," she said in comfortable Korean. "They're very pretty and dance well. That's why I like them.

"I go to K-pop concerts and pre-recorded TV broadcasts once or twice a week if they're on," she added with a smile. 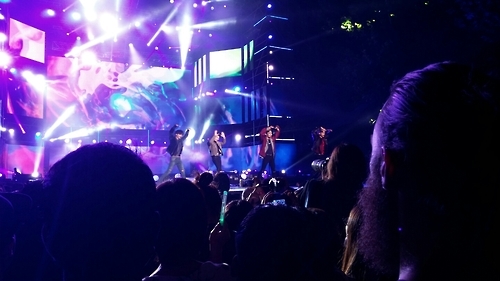