Outbound shipments came to US$40.9 billion last month, down from $43.4 billion the same month last year, according to the Ministry of Trade, Industry and Energy.

The figure relapsed to negative terrain in just one month, following the turnaround in August that snapped a record 19 straight months of negative growth that began in January 2015. 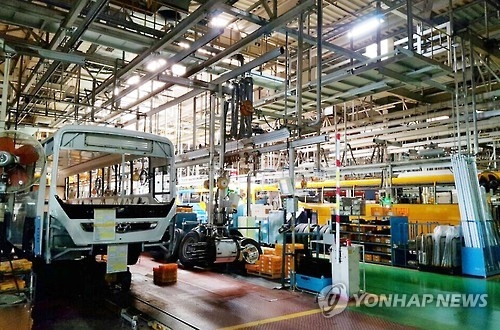 The ministry said the downturn is largely attributable to partial strikes at major carmakers, including industry leader Hyundai Motor Co., over demands for a wage hike and better welfare.

"The walkouts in the automobile industry were the most decisive factor for a drop in outbound shipments," the ministry noted. "They dragged down all exports by 79,000 units of cars, worth $1.14 billion."

Car exports tumbled 24 percent on-year in September, the steepest on-year decline since August 2009 in the aftermath of the global financial crisis.

At the same time, exports of wireless devices plunged 27.9 percent on-year in September, marking the largest monthly drop in more than four years, due to a recall of Samsung Electronics Co.'s Galaxy Note 7. The company announced the recall plan in early September following a series of battery fires.

Outbound shipments of semiconductors also fell 2.6 percent last month, compared to a 2.5-percent gain in August on rising demand for mobile chips due to global releases of new smartphones like the Galaxy Note 7 and Apple Inc.'s iPhone 7.

Shipbuilders exported 26 vessels last month, but the amount sank 13.6 percent, a sharp downswing from an 89.9-percent surge in the previous month.

However, exports of personal computers and auto parts went up, offsetting the decline in cars and electronic devices.

Overseas sales of South Korean computers jumped 13.3 percent last month to extend its winning streak to five months in a row, while auto components saw their exports gain 3.5 percent from a year earlier.

Flat displays, which have been struggling due to global oversupply, decreased 3.7 percent in September, but the monthly pace was the slowest since July 2015, on a slight upbeat trend of panel prices.

Exports to China, South Korea's largest export destination, sank 9.1 percent in September from a year ago, continuing the losing streak that started at the beginning of the year.

Shipments to the United States and the European Union also fell 6.1 percent and 14.5 percent, respectively. 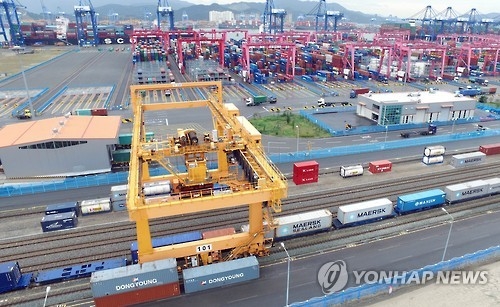 "But it's too early to be optimistic due to lingering downside risks at home and abroad including a slowdown in global trade, a possible U.S. rate hike and sluggish exports of cars and mobile handsets."