SEOUL, Oct. 1 (Yonhap) -- Samsung Electronics Co. said Saturday it has resumed the sales of the controversial Galaxy Note 7 phablet in South Korea, roughly a month after it suspended sales due to defected battery problems that posed safety concerns.

South Korea's No. 1 tech giant started to receive pre-orders for the latest phablet, a cross between a smartphone and tablet PC, on Wednesday, selling some 16,000 units on the first day. Industry watchers said Samsung is set to sell around 20,000 units daily starting Saturday.

The company first kicked off sales of the much-awaited phablet on Aug. 19, boasting various high-end features. But sales were suspended earlier in September due to reports of some handsets catching fire while charging.

The V20 smartphone comes with a detachable battery and dual cameras, as well as other top-notch features. It is also the first smartphone in the world to run on Google's latest Android mobile operating system called "Nougat". 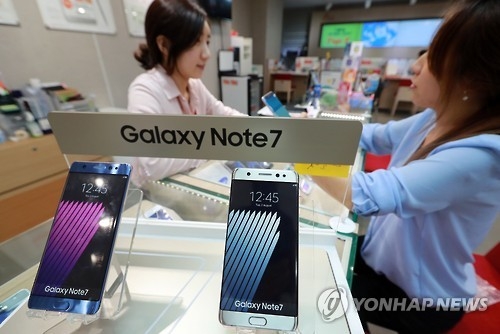