During her speech to mark the country's Armed Forces Day, the commander-in-chief underscored that it is the communist regime's "miscalculation" to seek internal stability and cohesion by showing off its nuclear and missile capabilities and escalating military tensions.

"The North Korean regime is now testing our will, and seeking to disrupt our society by (sowing) internal division," Park said during the speech at the Gyeryongdae military headquarters in South Chungcheong Province, some 160 kilometers south of Seoul. 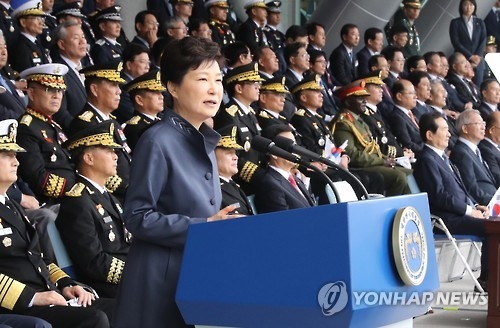 "At this point, (the act of) aggravating division and confusion in our midst is more dreadful than nuclear provocations that North Korea wants," she added, calling for "unity beyond ideological and political differences."

The president also pointed out that as the North seeks to advance its nuclear weapons capabilities, it will not renounce its nuke tests and missile provocations, and that the security situation at present is "critical."

To counter the evolving threats, Park stressed the need to further strengthen "effective measures" based on Washington's extended deterrence, and to beef up South Korea's own military capabilities, its Kill Chain preemptive strike system and Korea Air and Missile Defense system.

Extended deterrence refers to the U.S. stated commitment to defend its allies by mobilizing all military capabilities, nuclear and conventional, against aggression and provocations.

The president, in addition, defended the decision by Seoul and Washington to deploy a U.S. anti-missile system to the Korean Peninsula by end-2017, calling the decision a "minimal self-defense" measure.

Denouncing Pyongyang's two-pronged policy that seeks to simultaneously develop its nuclear arms and shore up its debilitated economy, Park underscored that the policy would only deepen the North's international isolation and its people's economic travails, and destabilize its autocratic regime.

"I call on North Korea to face the trends of the time and its reality, and to return to a path towards a normal state," the president said.

Park, in addition, called attention to the regime's reign of terror and human rights abuses, pointing to a recent increase in defections from North Korea, including those in the country's top echelons, which she has cited as an indication of "cracks" in the North's governing system.

"Chances are high that to fend off internal instability and social confusion, North Korea will stage various acts of terrorism and provocations, such as saber-rattling along the Northern Limit Line (NLL) and the Demilitarized Zone," she predicted.

The NLL refers to a de facto inter-Korean sea border, which Pyongyang has long disputed, arguing that it was unilaterally drawn by the U.S.-led U.N. Command after the 1950-53 Korean War.

Park, in particular, sent a message to North Korea's rank-and-file troops and citizens, saying that South Korea is well aware of their "gruesome" realities.

"The international community is also seriously concerned about the North Korean regime's human rights abuses," she said. "The universal values of freedom, democracy, human rights and welfare are the precious rights you (North Koreans) should also enjoy."

The president, then, pledged that the Seoul government would do its best to shine a light on the realities of suffering North Koreans.

"(South Korea) will leave the path open so that North Korean people can find hope and (new) lives," she said, inviting those that flee the country to find a new home in South Korea. 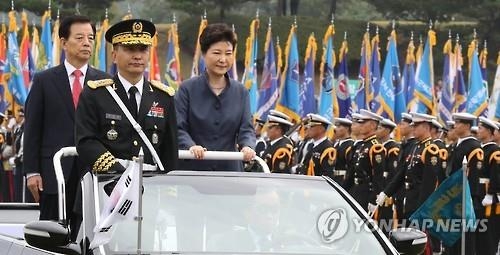