SEOUL, Oct. 2 (Yonhap) -- A revision of the parliament law to clearly stipulate the speaker's duty to remain neutral may emerge as a way to resolve the latest deadlock at the National Assembly, political pundits said Sunday, as the public is growing impatient over prolonged discord that has disrupted normal proceedings.

There has been a rising debate over the political neutrality of National Assembly Speaker Chung Sye-kyun, with the ruling party claiming the speaker's recent actions intentionally gave support to the opposition bloc affected the impartiality of parliamentary affairs.

The deadlock at parliament began when the opposition parties passed a motion asking for the dismissal of a Cabinet minister, despite Saenuri's boycott of the session. Saenuri and the presidential office have argued the dismissal motion was politically motivated and had nothing to do with actual wrongdoing.

The Saenuri, in addition, claimed the vote itself did not follow parliamentary rules, although Chung argued all due procedures were respected.

The two side's relationship further deteriorated when a voice recording obtained by the ruling party showed Chung saying that the Saenuri should not "ask for something for free," indicating the speaker may have wanted to utilize the dismissal motion to force concessions on other issues that are important to the opposition.

Chung is originally from the main opposition Minjoo Party of Korea but left the party in accordance with the South Korean law that the speaker cannot belong to a party.

Observers said the ruling and opposition bloc may seek to reach a compromise by reviewing the so-called "Chung Sye-kyung prevention law," proposed by Saenuri's party whip, which calls for clearly stipulating the political neutrality of the parliamentary speaker.

Existing law only stipulates that the National Assembly speaker "cannot be a member of a party from the second day of designation during the term." Thus, the proposed bill is set to make the political neutrality not a moral value, but a legal responsibility of the speaker.

"While the majority of lawmakers in Saenuri are opposed to making concessions, we are looking into other ways as Chung is unwilling to budge," said Rep. Cho Won-jin of Saenuri, who heads an emergency committee on the issue.

Pundits added although Chung is clashing with the ruling party, the Saenuri is also currently feeling the heat, as its boycott of the parliamentary audit can cost it public support.

Others said that with the speaker showing no signs of resignation, Saenuri does not have the seats to oust Chung from his post, requiring the party to make compromises.

Accordingly, some Saenuri members have said opting for a new parliamentary law will be more beneficial for the party because it can save face while sending a message to the general public that Chung's actions need to be checked to ensure smooth running of the National Assembly. 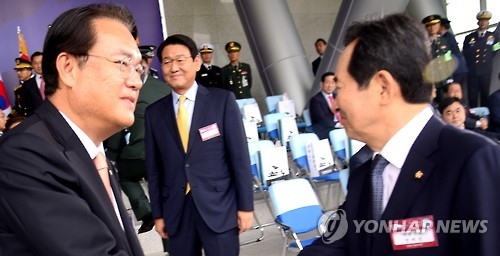