MOKPO, South Korea, Oct. 2 (Yonhap) -- The Coast Guard said Sunday it is looking closely into the causes of deaths of three Chinese fishermen who were on a boat that caught fire while operating illegally in waters off South Korea's southwestern coast last week.

The Mokpo Coast Guard is questioning Chinese fishermen in custody to figure out the exact circumstances before and after the fire engulfed the Chinese fishing boat. Fourteen Chinese fishermen were rescued Thursday, but three others were found dead later on the boat.

Authorities are asking why some crew members locked themselves in a steering cabin and barred entry despite repeated commands from the Coast Guard to stop the boat and surrender.

The Coast Guard said it was having difficulties contacting the families of the dead sailors to discuss autopsies to determine the exact causes of their deaths. It asked the Chinese authorities to track down the families.

A Coast Guard official said, "We plan to bring the families here so they can attend the autopsies." 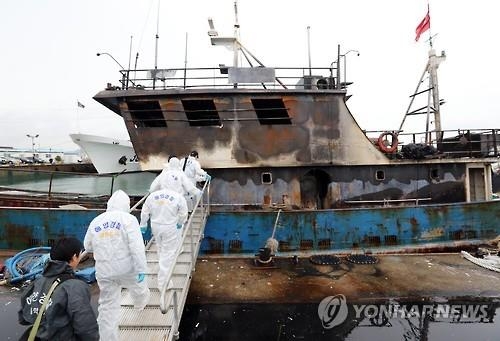 After a team of experts finished examining the boat, the National Forensic Service (NFS) said it will probably take about three weeks to release the full results of its investigation.

The probe will focus on whether the nonlethal stun grenades that were thrown into the locked cabin in order to get the crew members to come out were directly related to the fire.

The Coast Guard doesn't rule out other potential reasons for the fire given that there is hardly any precedent of stun grenades starting fires. They also said it is strange that the fire started almost immediately after the grenades were used. The timing may indicate another cause for the fire.

It will also look closely into whether or not the Chinese fishermen broke any Korean laws, while resisting the boarding party and arrest.

Meanwhile, a court will decide Tuesday whether to grant an arrest warrant for the Chinese captain for poaching in South Korea's exclusive economic zone. 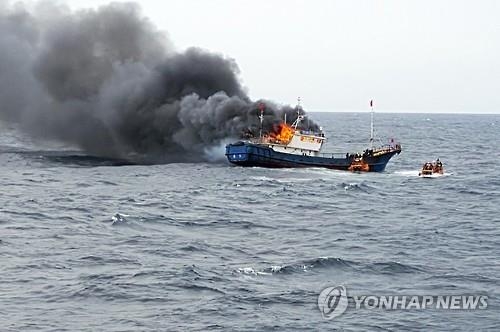 Coast Guard to determine causes of deaths of 3 Chinese fishermen

Coast Guard to determine causes of deaths of 3 Chinese fishermen