Government sources said Washington is considering moving a battery from Fort Bliss to Seongju by late 2017 as part of an agreement with Seoul. The move will involve the deployment of the AN/TPY-2 radar and associated equipment, a command and communications unit, and some six truck-mounted launchers with eight interceptors each.

South Korea and the United States agreed to deploy a THAAD battery in July with Seoul announcing Friday that a country club near Mt. Dalma in North Gyeongsang Province being chosen as the site for the antimissile unit.

The two allies are expected to iron out details of the deployment at the 48th Security Consultative Meeting set for Oct. 20 in Washington.

An insider then said Washington has made clear it wants to set up the THAAD battery as soon as possible, to better assure South Korea that it is serious about defending the country from the North's missile and nuke capabilities.

Reflecting this stance, U.S. Assistant Secretary of State Daniel Russel remarked during a hearing before the House Foreign Affairs Subcommittee on Asia and the Pacific last week that Washington will do its utmost to upgrade its defensive systems.

He said given the accelerating pace of North Korea's missile tests, the United States intends to deploy THAAD on an accelerated basis.

Others in the defense ministry said there is the possibility that servicemen from the U.S. THAAD battery in Guam will man the Mt. Dalma battery on a rotational basis.

"The soldiers at Guam are fully skilled in the THAAD system," an insider said. He estimated if these troops are assigned to South Korea they will stay some six months to a year.

Besides such plans, one official said that while the Lotte Skyhill Country Club will likely be designated as a military facility, Seoul plans to keep the size of the base as small as possible.

"Only the country club will be affected by the designation, with U.S. soldier likely to be stationed at a nearby base," an official hinted. This move will reduce the inconvenience for residents in surrounding areas, who are apprehensive that a military base in their midst will affect real estate prices and impose new development restrictions. 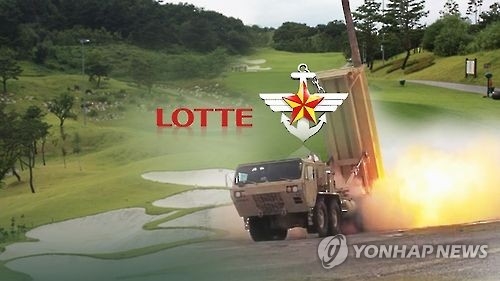 THAAD battery from Texas to be deployed in Seongju: sources

THAAD battery from Texas to be deployed in Seongju: sources