SEOUL, Oct. 2 (Yonhap) -- The chief of the country's ruling political party ended his week-long hunger strike on Sunday, with the Saenuri Party's lawmakers returning to the National Assembly to attend the regular parliamentary audit which has been in limbo amid their boycott, party officials said.

Lee Jung-hyun, the head of the ruling party, began his hunger strike on Monday this week in protest of opposition moves to sack the country's new agriculture minister.

Also, Lee, a former presidential secretary for President Park Geun-hye, and other Saenuri Party members have called on National Assembly Speaker Chung Sye-kyun to step down for supporting the dismissal motion spearheaded by the two opposition parties, including the Minjoo Party of Korea.

Chung is originally from the Minjoo Party of Korea. "It is people's wish to correct the House Speaker's partisan operation of the parliament, and their wish is that we have to serve as a ruling party by returning to the audit," Rep. Chung Jin-suk, the floor leader of Saenuri, said during a press conference.

The party's lawmakers will attend the parliamentary audit from Tuesday, he said.

The lawmaker also said his party will seek to revise a parliamentary law to clearly stipulate the speaker's duty to remain neutral as a way to resolve the latest deadlock at the National Assembly.

Observers said the ruling and opposition bloc may seek to reach a compromise by reviewing the related law, proposed by Saenuri's party whip, which calls for clearly stipulating the political neutrality of the parliamentary speaker. 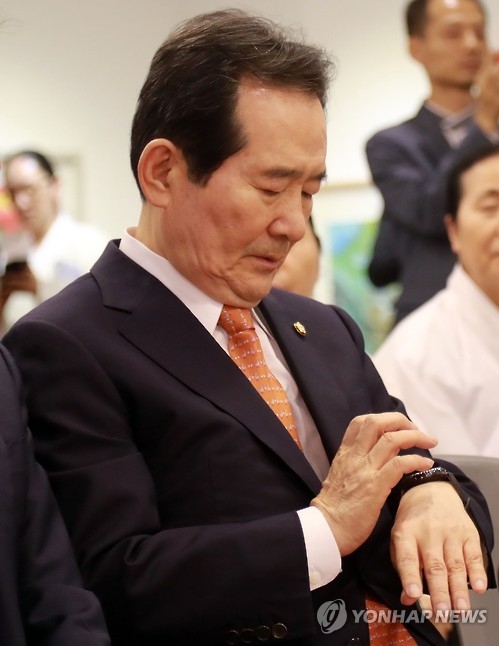