WASHINGTON, Oct. 2 (Yonhap) -- South Korea has had no discussions whatsoever with the United States about a preemptive strike on North Korea, Seoul's ambassador to Washington said.

Amb. Ahn Ho-young made the remark during a parliamentary audit of his embassy on Saturday as talk of removing North Korea's nuclear facilities through a military strike has surfaced in the U.S. in the wake of Pyongyang's fifth nuclear test.

"We've had no such discussions at least here in Washington," Ahn said during the audit held at the embassy. "We've never received a request from the U.S. government for discussions about a preemptive strike." 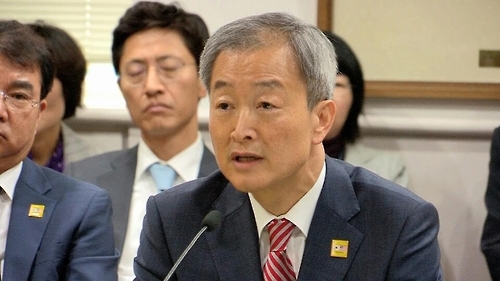 Last month, an independent task force report from the Council on Foreign Relations suggested that the U.S., South Korea and Japan should send a strong message to the North that future aggression will be met with a strong response, including "strikes against military targets inside North Korea."

Former U.S. Joint Chiefs of Staff Chairman Mike Mullen also said during a CFR discussion that it's important to develop "the capability to defend ourselves, which could theoretically take out launch capabilities on the launch pad or take them out once they're launched."

Asked whether President Barack Obama has any airstrike plans against the North at a regular press briefing, White House press secretary Josh Earnest said that in general the U.S. does not discuss any preemptive strike plans in advance.

The remark did not appear to suggest any military action is under consideration against the North, but the question itself showed heightened concern in the U.S. about the North's nuclear and missile programs in the wake of its fifth nuclear test earlier this month.

Amb. Ahn rejected speculation that the U.S. may be considering reopening negotiations with the North in exchange for the North's suspension of its nuclear activities.

The speculation arose after U.S. Secretary of State John Kerry said after trilateral talks with his South Korean and Japanese counterparts that the North should freeze its nuclear program so as to begin serious negotiations.

"The most practical solution would be to create a meaningful dialogue through sanctions and pressure," Ahn said. "Now is the time for us to make such meaningful efforts."