The regular season wrapped up across the United States Sunday (local time) with 15 games.

Choo Shin-soo of the Texas Rangers will be in the postseason for the second straight year. The Rangers have long clinched the American League West division crown and have also secured a home field advantage throughout the postseason with the best record in the AL at 95-67. They lost to the Tampa Bay Rays 6-4 Sunday.

Choo has had four trips to the disabled list in 2016, and was activated from his latest stint last Friday. He was 1-for-4 before getting lifted in the eighth inning, and ended the season with a .242 average, seven homers and 17 RBIs in 48 games. 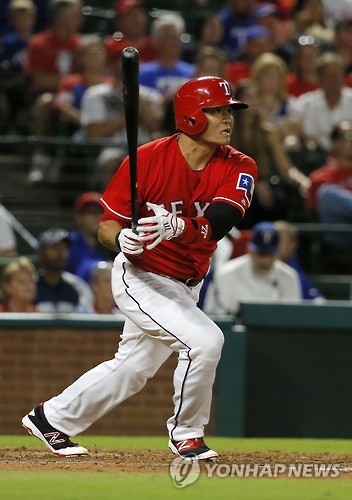 Kim Hyun-soo of the Baltimore Orioles has made it to the AL wild card game in his rookie season. They defeated the New York Yankees 5-2 on the road to secure one of two wild card spots at 89-73, and will travel to Toronto to face the Blue Jays on Tuesday.

The Jays got past the Boston Red Sox 2-1 Sunday to also finish at 89-73. They won the season series against the Orioles 10-9 for the tiebreaking edge. The winner of that one-and-done game will go on to face the Rangers in the AL Division Series.

Kim went 0-for-4 against the Yankees and finished his regular season with a .302 average, six homers and 22 RBIs in 95 games.

Choo and Kim are the only two Korean big leaguers who will keep playing ball in October.

In the AL, Lee Dae-ho and his Seattle Mariners fell three games shy of the second wild card spot at 86-76, losing the final two games of the season to the Oakland Athletics. In the 3-2 loss at home Sunday, Lee went 1-for-3 with a run scored and ended his rookie season with a .253 average, 14 home runs and 49 RBIs in 104 games.

Park Byung-ho of the Minnesota Twins is back home to undergo rehab for his surgically repaired right hand. After a solid start to his rookie season, Park was demoted to the minors in July and last played a game on Aug. 10.

The Twins finished with the worst record in the majors at 59-103 despite beating the Chicago White Sox 6-3 Sunday. 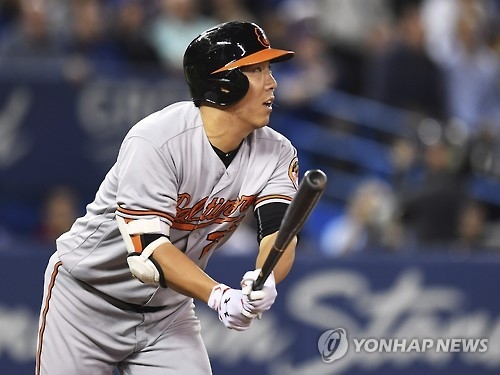 The Los Angeles Angels' youngster Choi Ji-man bounced between the majors and the minors all year, and struck out in his only at-bat Sunday as the Angels defeated the Houston Astros 8-1. The Angels finished fourth in the AL West at 74-88, and Choi hit .170 in 112 at-bats with five homers and 12 RBIs.

In the National League, St. Louis Cardinals' closer Oh Seung-hwan came the closest to joining Choo and Kim in the postseason as the Cards fell one game back of the San Francisco Giants for the second wild card spot at 86-76. They defeated the Pittsburgh Pirates 10-4 Sunday, but needed the San Francisco Giants to lose to the Los Angeles Dodgers to get into a tiebreaker game. The Giants instead beat the Dodgers 7-1.

The Pirates' third baseman Kang Jung-ho will miss the postseason for the second straight year. In 2015, he suffered season-ending leg injuries in September and sat out the Pirates' wild card game against the Chicago Cubs. This year, Kang has been swinging a hot bat since the start of September, but the Pirates, at 78-83, missed out on the postseason for the first time since 2012.

Kang was 0-for-4 in the season's final game and ended up with a .255 batting average. He set a career high with 21 home runs and 62 RBIs despite missing 59 games with injuries.

The Dodgers will be playing their second straight postseason without Korean left-hander Ryu Hyun-jin. He missed all of last season after a shoulder surgery, as the Dodgers were eliminated in the NL Division Series against the New York Mets. The Dodgers have won their fourth straight NL West title and are headed to another NLDS, but Ryu has been ruled out for the season after making just one start in July following his operation.