A total of 132,170 were working for banks as of end-June, the lowest number in nearly 10 years, the Financial Supervisory Service (FSS) said.

The number of bankers rose to 139,840 in 2008, but it has since declined, as banks have gradually reduced the number of both their branches and staff in the wake of the widespread use of online and mobile banking over the past years, the financial watchdog said. 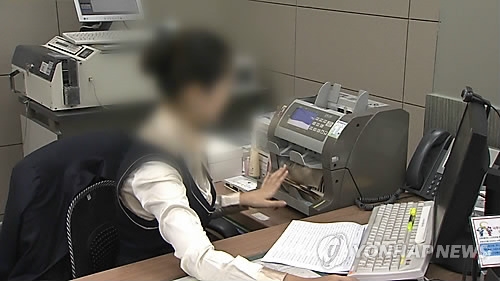 Banks reduced 1,450 employees in the first six months of this year, recruiting fewer staff and encouraging senior staff members to opt for early retirement plans with extra severance pay. The number of commercial bank branches slipped to 5,297 in June, cutting 115 from a year earlier, the FSS said.

A total of 59,444 employees were hired in the insurance sector in June, the lowest number in five years, as major industry players have suffered worsening profitability stemming from low interest rates.

"As the low interest rates are expected to last for a while, more insurance firms could tighten their belts down the road," an industry official said.

The hike, however, is not a result of brisk business, because it came after brokerages firms carried out massive layoffs in 2013-14 during which they dismissed nearly 6,000 employees, it noted.