SEOUL, Oct. 4 (Yonhap) -- South Korea will aim to deliver both a victory and an inspiring performance against Qatar in their World Cup qualifying match this week.

South Korea host Qatar at Suwon World Cup Stadium in Suwon, some 46 kilometers south of Seoul, at 8 p.m. Thursday. This is their third match in the final Asian qualification round for the 2018 FIFA World Cup. South Korea will then travel to Tehran to take on Iran next Tuesday.

In the final regional qualification, South Korea are paired with Qatar, Iran, Uzbekistan, China and Syria in Group A. The two top teams will earn automatic berths in the quadrennial tournament, while the third place team will have to go through playoff rounds to earn their spot at the World Cup.

South Korea, trying to make their ninth World Cup consecutive appearance, had unfulfilling performances in their first two matches, although they didn't pick up a loss. The Taeguk Warriors collected a 3-2 victory against China at home -- nearly blowing a 3-0 lead -- and settled for a scoreless draw with Syria on the road.

South Korea, now sitting third in the group behind Iran on goal difference, are looking to turn the tables by collecting a victory with an improved performance this time.

The showdown at Tehran will probably be the most difficult match in this World Cup qualifying campaign since South Korea have never won there. South Korea head coach Uli Stielike, however, emphasized that before thinking about Iran, his 23 players must first focus on how to beat Qatar, currently last in the group with two losses. 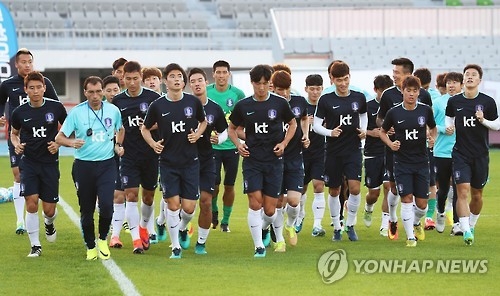 South Korea, 47th in the latest FIFA rankings, lead in the head-to-head record against No. 85 Qatar with four wins, two draws and one loss. Their only defeat came in 1984, when they lost 1-0 at the Asian Cup in Singapore.

The two last met in 2013 for the 2014 FIFA World Cup qualifiers and South Korea won 2-1 at home, thanks to goals from Lee Keun-ho and Son Heung-min.

Son will be again looking to put his name on the scoresheet. The Tottenham Hotspur player is in red-hot form with five goals in six matches this season.

Son will be joined by other in-form attackers like Jeonbuk Hyundai Motors target man Kim Shin-wook. The 196-centimeter striker has netted four goals in his last four matches at the K League Classic and at the Asian Football Confederation Champions League.

Stielike's side will also seek help from those who play in the Qatari League. Winger Nam Tae-hee, who is with the Qatar Stars League (QSL) leaders Lekhwiya, and defensive midfielder Han Kook-young of Al-Gharafa SC are the two players who can give tips on Qatari footballers.

Players from European leagues, such as Swansea City anchorman Ki Sung-yueng and Crystal Palace midfieder Lee Chung-young, will also be available to start against Qatar, but Stielike said they need to recover their stamina.

On defense, Stielike called up veteran center back Kwak Tae-hwi, hoping he can ensure discipline within the team. But the team's full backs might be a cause for concern.

Both Hong Chul and Jeong Dong-ho are making their national team return after a year-long absence, while Oh Jae-suk made his international debut just last month. Ko Kwang-min has been named to the national team for the first time.

None of the four full backs have played more than eight international matches.

Although Qatar are expected to sit back with their dogged defense, Stielike has cautioned his players to be aware of Qatar's counterattacks. The German coach said he will try to balance the offense and defense at Thursday's match.

Qatar, the hosts of the 2022 World Cup, will have a fresh look with new head coach Jorge Fossati.

The 63-year-old Uruguyan replaced Jose Daniel Carreno just last week, but he is familiar with the team. He already managed Qatar between 2007 and 2008 during the 2010 World Cup qualifiers. Before taking the national team job, he had coached Al Rayyan to the QSL championship last season.

After a coaching change, Qatar had a friendly against Serbia behind closed doors last Thursday in Doha. They collected a 3-0 victory, thanks to a hat trick by Sebastian Soria.