South Korea host Qatar at Suwon World Cup Stadium in Suwon, some 46 kilometers south of Seoul, at 8 p.m. Thursday. This is their third match in the final Asian qualification round for the 2018 FIFA World Cup.

After playing Qatar, the Taeguk Warriors will face Iran in Tehran on Oct. 11. Along with these countries, South Korea are paired with China, Syria and Uzbekistan in Group A at the final regional qualification round.

Stielike said his players first need to recover their stamina. On the 23-man squad, six of them arrived in South Korea after playing their matches in European leagues over the weekend. Eight players who are with the domestic K League Classic clubs also had their weekend action.

"Usually, it takes about 48 hours for the players to recover their stamina after playing a match," Stielike said. "This means the players will be ready to have full training on Wednesday, but that's just one day before the match, so we can't do intensive trainings."

South Korea, trying to reach their ninth World Cup consecutive appearance, had uninspiring performance in their first two qualifiers last month, although they didn't pick up a loss. They collected a 3-2 victory against China at home -- nearly blowing a 3-0 lead -- and settled for a scoreless draw with Syria on the road.

South Korea are now third in the group, trailing Iran on goal difference.

Qatar, fifth in the group with one draw and one loss, have recently appointed a new head coach to lead their team. With Uruguayan Jorge Fossati in charge, Stielike said Qatar will be a different team. The German, however, said his side will not change their style of football.

"If we can execute our tactics on the pitch, we'll be fine," he said. "Since Fossati is an experienced leader and knows the Qatari team well, we need to be prepared well.

Stielike, however, cautioned the players that they need to be aware of Qatar's counterattack tactics.

"Some Qatari players are fast, so we need to be aware of their counterattacks," he said. "We need to find a balance between offense and defense, and it's important not to concede goals."

Stielike said he will not use in-form Tottenham Hotspur attacker Son Heung-min as a striker. The 24-year-old has been in hot form, collecting five goals and two assists in his six matches for the Spurs this season. The former Bayer Leverkusen man has been playing as striker in recent matches after the Spurs' main target man Harry Kane got injured.

"Son seems to be more comfortable playing on the flanks," Stielike said. "I think Tottenham will not use Son as a striker for a long time since he is temporarily doing the job because of Harry Kane's injury." 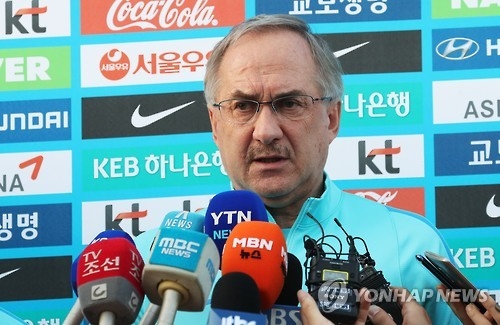