Kim joined the South Korean national football team for the first time since August 2015. He is one of the 23 players chosen by head coach Uli Stielike for the World Cup qualifiers this month.

South Korea will host Qatar on Thursday and travel to Tehran to face Iran five days later. These countries, along with Uzbekistan, China and Syria, are paired in Group A of the final Asian qualification round for the 2018 FIFA World Cup.

Kim moved to two-time league defending champions Jeonbuk from Ulsan Hyundai this year after capturing the scoring title in the top-tier K League Classic with 18 goals. The 28-year-old failed to put together good performances early on as he struggled to recover his form following his basic military training and a groin injury.

Kim's recent performance, however, proves he is back in shape, scoring four goals in his last four matches. On Sunday, he struck an equalizer in Jeonbuk's 1-1 draw against Sangju Sangmu, helping his club extend their unbeaten streak to 33 matches in the K League Classic.

Kim has also showed his ability to link up with midfielders using his 196-centimeter height during recent matches.

"I have to create space for my teammates," he said. "I want to show all the things that I can do on the pitch."

Kim has good memories about going up against Qatar. He scored his national team debut goal against the Arab nation in 2012. He has scored three goals in 32 matches for South Korea.

As the underdogs, Qatar are expected to sit back and defend. But Kim said he is ready to counter the opponents' tactics with his strong physique. He emphasized he can deliver a different style of play with forwards on the squad.

"I think I'm strong against those defensive-minded teams," he said. "I'm strong in the air and I can help my teammates well."

Kim said he is ready to help Tottenham Hotspur attacker Son Heung-min in the World Cup qualifiers. The two players are roommates ahead of the match against Qatar.

"For the country, I will help Son Heung-min to recover his form," he said. "This time, I'm ready to display more things than I had showed before." 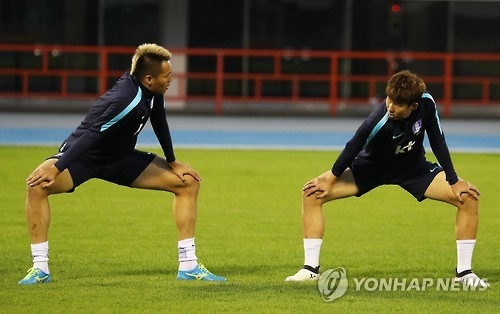 In-form striker to sacrifice for team in World Cup qualifiers

In-form striker to sacrifice for team in World Cup qualifiers