Son is one of the 23 players on the South Korean roster for the upcoming World Cup qualifiers this month. South Korea, ranked 47th in the latest FIFA world rankings, will host No. 85 Qatar at Suwon World Cup Stadium in Suwon, south of Seoul, on Thursday and face No. 37 Iran five days later on the road.

South Korea are currently sitting in third place in Group A with one win and draw. They are paired with Qatar, Iran, Uzbekistan, China and Syria.

Against Syria last month, South Korea were held to a scoreless draw. With Qatar's time-wasting tactics in the end, the Taeguk Warriors failed to tear the opponents' dogged defense. Son, who missed the match against Syria due to club issues, said that a similar situation will not happen this time.

"What's important that we should not create a situation that allows the opponents to go for time-wasting tactics," Son said. "We need to score first."

South Korea lead in the head-to-head record against Qatar with four wins, two draws and one loss. Their only defeat came in 1984. However, Son said the players are not going to let their guard down.

"People think we should be able to score a lot against the opponents like Qatar at home," he said. "But they are also a good team and it's difficult to win matches like this one."

Son arrived in his homeland on Monday. He said he is a little bit tired from the long flight, but he will be fit against Qatar.

Son aims to keep his red-hot club form on the international stage. He has registered five goals and two assists in his six matches for the Spurs this season.

In the English Premier League, he bagged two goals and an assist in Tottenham's 4-1 victory against Stoke City on Sept. 10. He also grabbed a brace to lead the London club's 2-1 win over Middlesbrough on Sept. 24. Against Manchester City on Sunday, Son set up Dele Alli to score his team's second goal in 2-0 victory.

In the UEFA Champions League, Son scored a winner against CSKA Moscow last Tuesday. He had eight goals across all competitions last season.

Against Manchester City, Son seemed to scuffle with teammate Erik Lamela over who would take Tottenham's spot kick during the second half. The South Korean tried to wrestle the ball out of Lamela's hands, but the Argentine proceded to take the spot kick. However, his effort was saved by Claudio Bravo.

Since then, there's been a lot of discussion online and on social media about whether Lamela was right to take the penalty, but Son defended his teammates.

"If you are an attacker, it's obvious that you want to take the penalty," he said. "I feel bad that Lamela didn't score the penalty, but that's part of the game."

Son was seen kicking at a water bottle on the ground and throwing a towel toward the bench after getting substituted in previous matches.

Son said he understands what the German coach said and will not behave the same way again.

"I have to accept what he said and it's true that my behavior was wrong," he said. "I have to do what's best for my team." 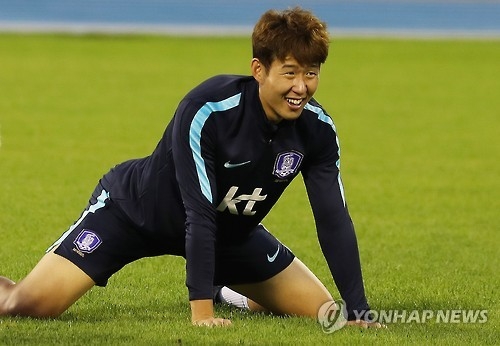