Korea Sale FESTA, which is South Korea's biggest shopping gala, opened last week for a month-long run. It features various special discounts and offers as well as cultural performances associated with the Korean Wave, or hallyu, for shoppers at home and foreign tourists.

Sales at Lotte Department Store jumped 12.8 percent from last Thursday to Sunday compared with the first four days of last year's shopping festival, according to Lotte.

In particular, Chinese tourists' spending soared 38 percent at the Sogong-dong branch of the department store in central Seoul. A growing number of Chinese people are visiting South Korea amid their country's National Day holiday to continue through Friday.

"On the occasion of Korea Sale FESTA, sales of almost all products have been on the rise," Jeong Hyun-seok, a Lotte official said. "We will have various offers until the festival ends." 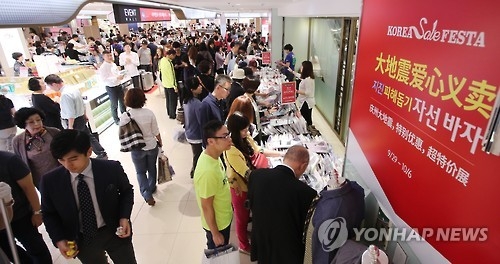 More than 70,000 customers visited the Trade Center branch of the department store in southern Seoul on the first day of Korea Sale FESTA, the firm said. Chinese visitors' purchases climbed 81.7 percent at the branch.

"Sales have increased some 20 percent from a month earlier," an official at the Galleria duty free shop said. "There have been many Chinese customers since Oct. 1, when the National Day holiday began."
(END)